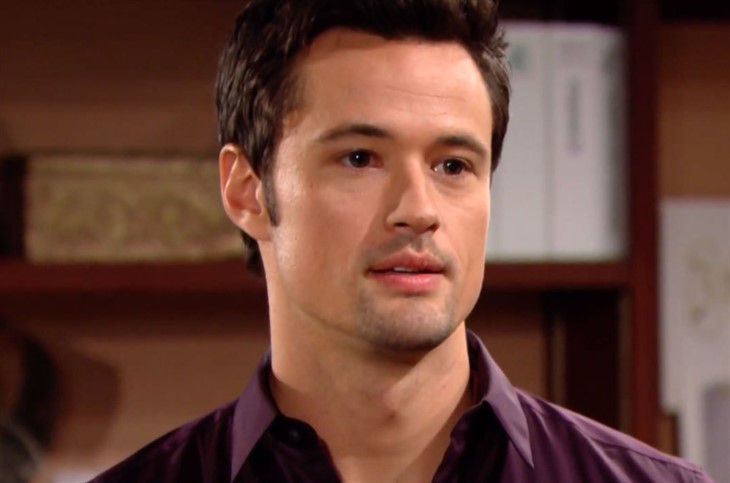 CBS The Bold and the Beautiful spoilers tease that Thomas Forrester (Matthew Atkinson) is back and might actually be trying to live a better life. Steffy Forrester’s (Jacqueline MacInnes Wood) visit from her recently absent brother is noteworthy, as fans are enjoying fresh episodes.

The last time viewers saw Thomas was in mid-March. He’d been humiliated in a terrific set of linked episodes that centered on his intended marriage to Zoe Buckingham (Kiara Barnes). The fallout from the climax scene, where Hope Logan (Annika Noelle) and Douglas Forrester (Henry Samiri) tricked Thomas into believing they wanted their family back, caused a dramatic confrontation.

Thomas was roundly rebuked by Hope, Douglas, Zoe, and various other people. He appeared genuinely distraught, left his grandfather’s house, where the wedding ceremony was in progress and hadn’t been seen since.

The Bold And The Beautiful Spoilers – Hope Spencer’s Reference Noticed

Digitally skipping to August, there has been a modest time jump imposed. Viewers have seen that Hope and Liam Spencer (Scott Clifton) are now married. Also, when Lope was present at the cliff house during Steffy’s return from the hospital, Thomas and Douglas were mentioned together.

Viewers noticed that the plot has advanced. Thomas wasn’t seen from mid-March on as of the last new episode airing in late April. But Hope talked about Thomas and Douglas being together, which means that Atkinson’s character obviously returned and was able to reach some accord regarding his son.

Douglas is wise beyond his years, as his boldness proved during the arc that had Phoebe Forrester (Madeline Valdez and River Davidson) revealed as Beth Spencer. B&B fans know that Samiri is also one of the best child actors seen on the show in years.

Thomas’ use of his son as a weapon against Hope, during different points in the plot, was exposed. The Beth storyline elicited Douglas’ anger. In current times it’s reasonable to believe that this young man feels compassion for his father and missed him while they were apart.

The Bold And The Beautiful Spoilers – Forgiveness Factor Must Be Explored

Thomas will need to be consistent if he wants to restore his relationship with Douglas and other family members. The same is true with the person who seems to be Thomas’ only friend, Vincent Walker (Joe LoCicero).

Whether Thomas has dealt with his Hope obsession, can regain Zoe’s trust and potentially revive that relationship, and can re-establish himself at Forrester Creations are all open questions. Steffy, Ridge Forrester (Thorsten Kaye), and Eric Forrester (John McCook) also need to know that Thomas won’t take advantage of their generosity either.

The Bold And The Beautiful Spoilers: Ridge’s Divorce Filed, But Not By Him? Quinn’s Fraud https://t.co/Pa90p2xJ7O pic.twitter.com/aZZUkgGLkn

Forgiveness can be offered. But Thomas will have to prove that he’s actually changed and isn’t playing everyone again.