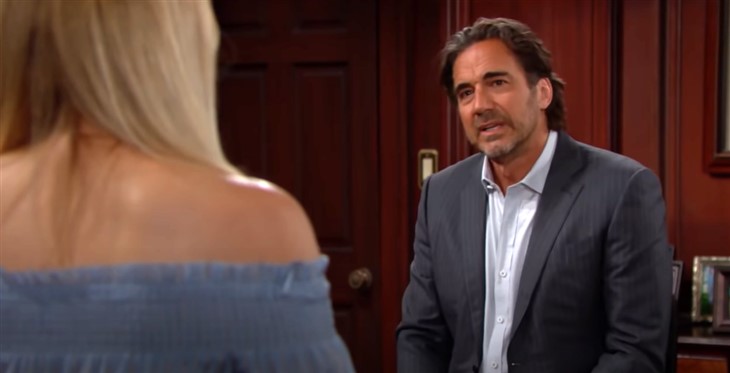 CBS The Bold and the Beautiful spoilers reveal that Ridge Forrester (Thorsten Kaye) and Brooke Logan Forrester (Katherine Kelly Lang) will get back together. However, is that what he really wants? He makes an excuse that he has to work late and it is teased that he is “distancing” himself. So, who exactly is he trying to avoid?

The Bold And The Beautiful Spoilers – Brooke Logan Forrester’s Wish

B&B spoilers reveal that Brooke has not given up on the man she loves. Despite all of the things they have gone through, “Bridge” has always managed to reconcile. However, this time is a bit different because of Ridge marrying Shauna Fulton (Denise Richards). But this is a tiny detail that hasn’t been revealed yet. So, Brooke keeps trying to encourage Ridge not to let her constant infidelity get between them.

In the meantime, Ridge will begin to remember bits and pieces from his wild night in Las Vegas with Shauna. However, he doesn’t yet realize that he allegedly tied the knot with Shauna. Now, we say allegedly because there is something off about this whole marriage business. There is a chance that Shauna and Quinn Forrester’s (Rena Sofer) secret has to do with this marriage license that magically shows up.

The Bold and the Beautiful spoilers reveal that Ridge is having a hard time looking at Brooke without thinking of Bill Spencer’s (Don Diamont) lips all over her. He also has a hard time forgetting about Shauna and it seems she is on his mind a lot. Even so, it is teased that “Bridge” will reunite. However, there won’t be a happily ever after for the couple just yet.

In Soap Opera Digest, it is stated that during the week of August 10, Ridge will “distance” himself by working late. Who exactly is he trying to distance himself from? Could it be that even though he reconciles with Brooke that his heart isn’t quite ready to forgive her yet? To find out, we will just have to keep watching the CBS soap opera.

Who would you like to see Ridge Forrester with? Does he belong with Brooke Logan Forrester or Shauna Fulton? Or should he just be single for a bit and figure out exactly what — and who — he wants?