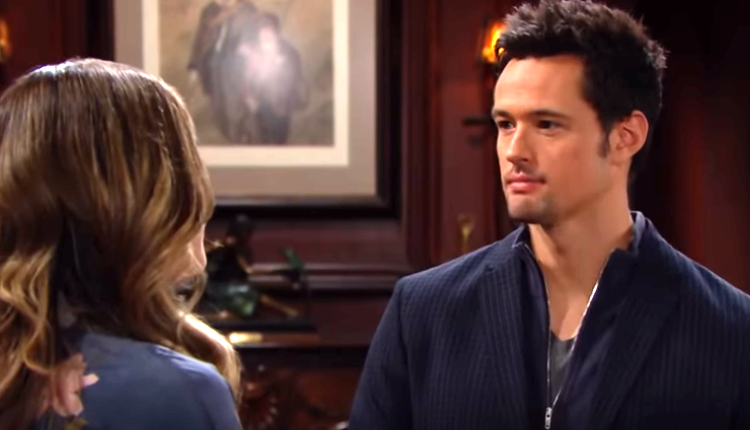 The Bold and the Beautiful spoilers tease that Thomas Forrester’s (Matthew Atkinson) compassion will lead to some of the progress he’s been seeking with the woman he loves. Thomas’ seemingly unlikely goal of rebuilding trust with Hope Logan (Annika Noelle) was furthered by the most unlikely scenario.

Meanwhile, with yet further strife between her and Liam, Hope has amazingly turned to Thomas for comfort. She’s still leery of him but seems drawn back to the same dysfunctional dynamic.

The first and most notorious lie was and likely always will be connected to Beth Spencer (Madeline Valdez and River Davidson). An open heart could forgive Thomas that major transgression, as Hope, seems to have done.

But a measured mind would never choose to work with Thomas when there are plenty of other talented designers in the fashion world. It was that choice that told viewers Hope could be written into a Thope sequel.

Say, for speculation’s sake, Steffy tells Liam that Thomas tipped her off to Hope’s imminent arrival at the cliff house. Then, Liam relays that information to Hope. Well, Noelle’s character will still have been betrayed!

Liam and Steffy’s potential for a full reunion would be put in jeopardy. But the truth Steffy withheld from Liam had nothing to do with him returning her kiss.

Hope saw what she saw, was shocked, and is correct in concluding that Liam isn’t over Steffy. He can argue otherwise, but Liam admitted to Steffy that he kissed her back. Hope knows that she’s not Liam’s only love.

The Bold And The Beautiful Spoilers – Triangle Tension Impacting The Children

Liam is tied to both ladies forever because of the children he’s had with them. What matters more than his feelings, or those of Hope and Steffy is how Kelly Spencer (Zoe Pennington and Allison Marcia Sweeney) and Beth are treated by all of the adults mentioned.

Thomas was purely trying to provoke Liam when saying that he wasn’t being a good father to Kelly and was stringing Hope along. If Steam is rebooting itself, Liam will need to ensure that he sees Beth on a regular basis, as he can’t allow what’s happened with Hope, or his feelings about Thomas, to prevent him from being there for Beth whenever she needs him.

Days of Our Lives Spoilers: Dr. Rolf Forced To Pull The Trigger – Surprising Turn Of Events in Salem