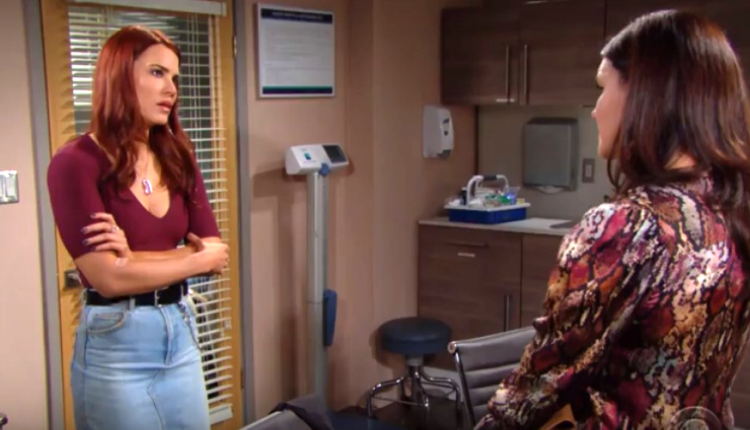 Sally Spectra (Courtney Hope) is scared on ‘The Bold and the Beautiful’. A health condition is looming that will impact her life and the lives of those around her.

Confiding in Katie Logan (Heather Tom) isn’t something Sally expected to do, but it happens. Now, as B&B fans prepare to learn Why Sally has begun shaking and what her diagnosis is, they are also considering how connected storylines will be impacted.

Clearly, Wyatt Spencer’s (Darin Brooks) life will be permanently linked to Sally if good news is revealed, meaning that she’s expecting his child. But if B&B is writing Sally in a dark direction, then a serious health struggle or dire outcome could result.

‘Wally’ is a fun nickname, as it perfectly captures the light-hearted elements that the pairing of Wyatt and Sally exhibited during its initial run. But it’s also a bit frivolous, as the second round of ‘Wally’ wasn’t something that Wyatt appears to have taken seriously.

The truth is out. Wyatt recently told Sally that he still loves Flo Fulton (Katrina Bowden), implying that he always loved her more than Sally.

Hope’s character, as viewers recall, quickly forgave Wyatt for ending their relationship. She took him back, with no preconditions, after he left Flo, following the Beth Spencer (Madeline Valdez and River Davidson) reveal.

The Young and the Restless Spoilers: Who Was Spying On Amanda and Billy – And Why? #yr #youngandrestlesshttps://t.co/qkawZqY1fq

Katie was very bitter for awhile. She ripped into Flo after learning that Storm Logan’s (William deVry) then-revealed daughter had shamed the family.

Flo was heartbroken and consistently apologetic, believing that she might never be able to make amends for what she’d done. Katie was written in because she was the recipient of Storm’s heart many soapy years ago. Late last year she received one of Flo’s kidneys, which prevented Katie’s death again.

In recent weeks, following Katie and Flo’s recovery from surgery, Tom’s character began leading the charge for forgiveness. That push has taken hold, underscoring Katie’s role as a peace-maker and generally linking to how she may be able to help Sally now.

The Bold And The Beautiful Spoilers – Sally Spectra Deserves Better

Sally is the underdog on this show, which follows in the line of her great aunt, the original Sally Spectra (Darlene Conley). But fashion design and past creative (to put it nicely) business methods aren’t the focus of this arc.

It would be a shame if Hope is being written out of the show through the start of what could be Sally’s demise. Fans of this solid actor are hoping otherwise.

Great soap can happen if Sally doesn’t have a terminal illness. Instead, let’s have her beat whatever the affliction, or better yet, realize something positive, like a Spectra and Spencer heir.