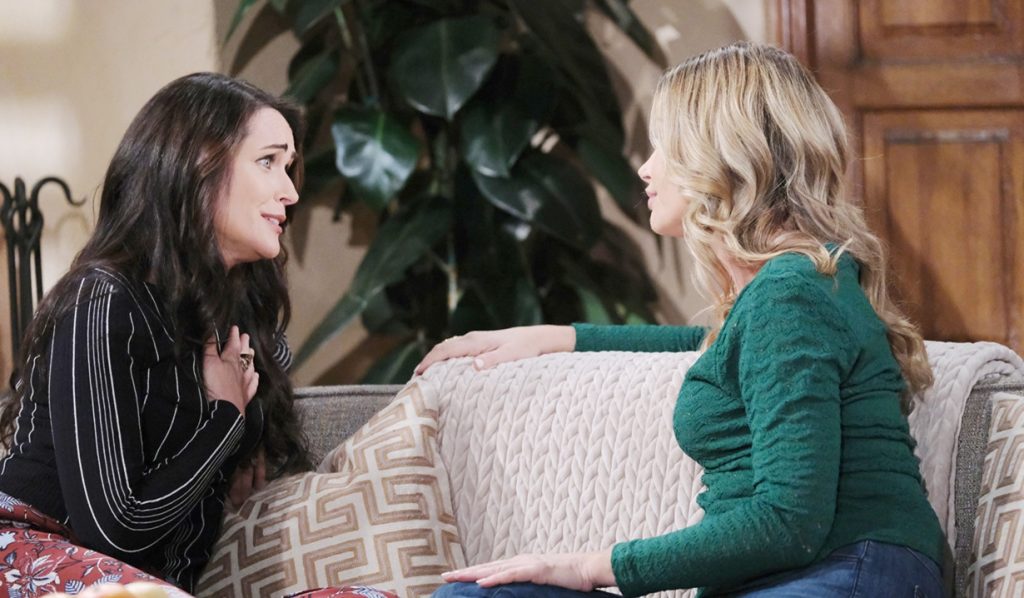 The Bold and the Beautiful spoilers reveal Quinn Forrester (Rena Sofer) is determined to make Brooke Logan Forrester (Katherine Kelly Lang) pay. She just needs to brainstorm the perfect plan. Could she get an idea that will teach Brooke a lesson, or will Quinn be the one who pays the price?

The Bold and the Beautiful Spoilers: Eric Forrester’s Solution

B&B spoilers indicate after hearing Brooke beg for Eric Forrester’s (John McCook) help, he agrees. The patriarch comes up with a solution, which is to force Shauna Fulton (Denise Richards) to leave the mansion.

However, things will get complicated when Brooke and Quinn’s battle gets physical.

It is confirmed that Brooke doesn’t know when to stop. Even though Eric agrees to kick out Shauna, that isn’t the only demand that was made. As fans recall from last week, Brooke lashed out and ordered Eric to dump his wife. This outburst will stun Eric, but he has no intention of ditching Quinn.

Quinn has heard everything Brooke said to Eric and has a tense confrontation with her enemy. Even though Eric shamed them for getting physical, it is hinted that the war will just get worse.

The Bold and the Beautiful Spoilers: Cat Fight! Brooke's Declaration and Quinn's Vow Back #bb #boldandbeautifulhttps://t.co/Fp50WCwOBe

The Bold and the Beautiful spoilers reveal Quinn has no tolerance for anyone trying to ruin her relationship. This is especially true when it comes to Brooke. A weekly promo clip shows Quinn saying that she is going to take down Brooke once and for all.

Not only is she determined, but Quinn could end up with a valuable partner. Together, Quinn and Thomas Forrester (Matthew Atkinson) could create the perfect payback plot.

The Bold and the Beautiful Spoilers: Partnerships and Panic

Quinn isn’t the only one to get a partner, though. It is suggested that Brooke has her own army that will back her up. Expect the Logan women to band together and even Bill Spencer (Don Diamont) will jump on board. This could cause Quinn to become concerned.

However, the number of soldiers doesn’t really matter. What determines the winner is a smart strategy, anticipating attacks and delivering powerful blows before Brooke has a chance to react.

Fans expect this epic battle to have major fallout when it finally ends. Who will end up victorious? Could Quinn eliminate her enemy or will Brooke end up getting the upper hand?