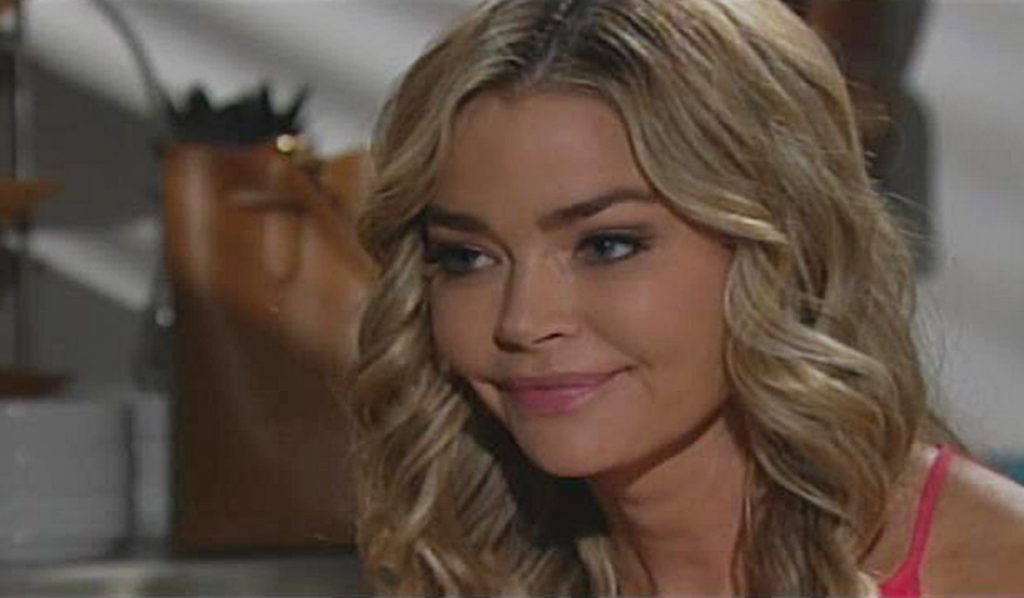 The Bold and the Beautiful spoilers tease that Shauna Fulton (Denise Richards) is hopeful that Brooke Logan’s (Katherine Kelly Lang) behavior will drive this storyline to an anticipated climax. Richards’ character assumes that Brooke is pushing Ridge Forrester (Thorsten Kaye) into a spot where he’ll finally end their marriage.

However, there is plenty of plot to play out. Ridge has continued to express his love for Brooke, recently going so far as to admit to kissing Shauna. That set off a wild scene at Eric Forrester’s (John McCook) home, which generates a number of outcome possibilities.

For the time being, Brooke and Ridge have remained together. That alone affirms the strength of their bond.

Bridge would likely have ended months ago if this couple was a short-time duo. The revealed happenings at Bikini Bar, during that night and by the morning after would have caused a lesser love to cut ties. Brooke signed divorce papers later, but Ridge initiated that action. But he’s since refused to file them.

Issues between Thomas Forrester (Matthew Atkinson) and Hope Logan (Annika Noelle) persist, with Bridge continuing to be impacted by them. However, time has allowed both halves of this couple to realize that their children’s troubles were affecting them to greatly. That wise perspective also affirms the deep level of concern Brooke and Ridge have for each other.

Quinn Forrester (Rena Sofer) made an important point, when speaking to her longtime friend Shauna in the aftermath of the face slaps. Mrs. Forrester told her that Brooke has pull with Eric.

The advice Quinn offered, regarding not taking Brooke for granted, was steeped in the harsh personal history Sofer and Lang’s characters have with each other. It also revealed why she responded to Shauna being slapped by slapping Brooke.

Quinn remains more than bothered that her husband and Eric remain friendly. She knows that Brooke occupies a place in Eric’s heart and is the mother of two of his children, which gives the former Mrs. Forrester influence.

Eric flat out told Brooke that he was not going to divorce Quinn because Brooke believes he should. He expressed his love for Quinn, which was a decisive comment.

Bold And The Beautiful Spoilers – Ridge Forrester Trying To Do Right

Ridge is serious about wanting to end his separation from Brooke. She honestly wants to reach accord as well.

Kaye’s character rejected Shauna’s request to get together and told her that he was pulling back from their connection because it had gone too far. But Shauna isn’t out yet, even with what he said and Quinn’s advice being heard.

Feeling justified, Brooke again proved that she can go too far. So, the strain within Bridge can still lead to a break.