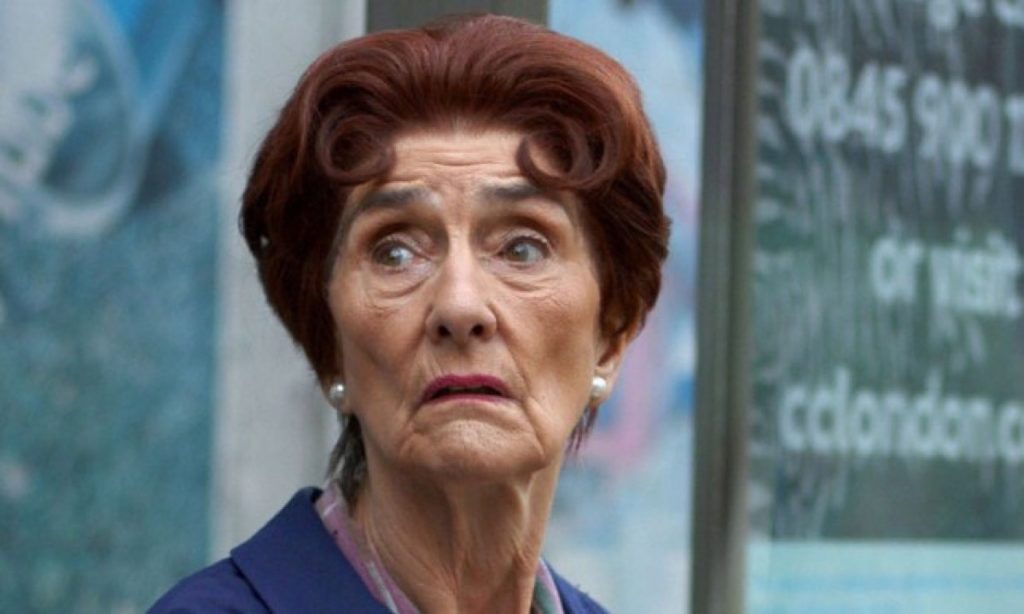 Fans are worried that fan-favorite Dot Cotton might leave the soap or die off-screen after hearing a voice message she left for Sonia.

After Dot Cotton (June Brown) left a worrying voice message for Sonia Fowler (Natalie Cassidy) saying a fond goodbye, EastEnders fans are concerned. This comes after Dot was devastated as she found out that Martin Fowler (James Bye) had stolen her savings

Of course, it was Sonia who took Dot’s money to help Martin out of a bad situation. However, Martin covered for Sonia and took the flack, explaining to her he didn’t want to lose his best friend. He said this was the least he could do for his ex-wife. The end result was Dot asking Martin to leave, while telling him she didn’t want to get the police involved.

However, as Martin headed out to the allotment shed, Sonia’s conscience got the better of her. She decided to head over to Dot’s house to confess everything. When she got there, there was no sign of Dot. All she found was a note addressed to her, along with a recorded message. In the message, Dot exlained she was going to Ireland to be with Charlie for the birth of his baby.

Still smarting from Martin’s supposed betrayal, Dot decided to leave Walford to escape all the drama. When Sonia played the voice message, she listened as Dot explained her reasons for leaving Albert Square. Dot said she was heading to Ireland to be with her beloved grandson Charlie. She said she wants to be there to help him when the new baby arrives.

Dot explained that she knew why Martin took the money, but said he shouldn’t have done it and she asked Sonia to sort out the situation for her. Telling her to let her know what happens, Dot reminded Sonia she was always available at the end of the phone line. Dot went on to say how much she will miss Sonia and that she will always love her dearest granddaughter.

EastEnders Spoilers: Sonia breaks down on hearing the message

On hearing Dot’s message, Sonia suffered a guilty conscience for taking her grandmother’s money and hiding the situation from Dot.

However, when fans heard the message, they immediately started believing Dot was leaving the show and that this would see the end of her character in EastEnders. Many asked on Twitter whether Dot was leaving the soap for good, while others wondered if Dot would be tragically killed off by the show. Keep watching EastEnders on BBC One at 7:30 pm to find out what happens next.