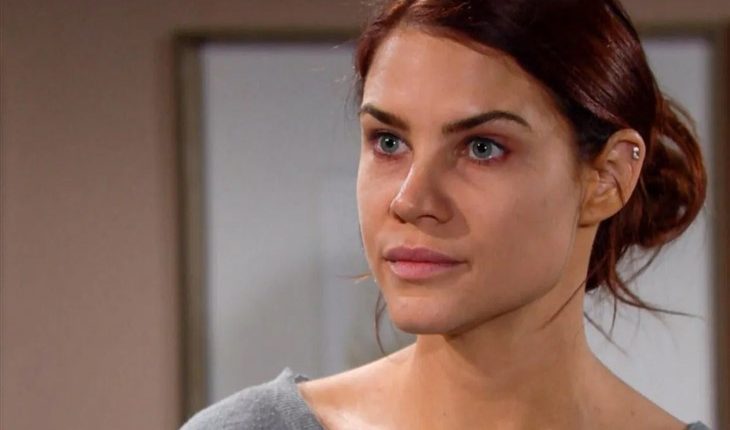 CBS The Bold and the Beautiful spoilers tease that Sally Spectra (Courtney Hope) believes that she won’t be spending time in jail. Flo Fulton (Katrina Bowden) offered her kidnapper a chance to avoid a likely fate, but it was rejected out of arrogance.

Penny Escobar (Monica Ruiz) doesn’t agree with Sally’s rosy view of the future. Like Flo she thinks it reflects a full break from reality.

It appears that Flo’s detainment at Sally’s apartment won’t last long. Flo’s message to Wyatt Spencer (Darin Brooks) was written on Sally’s body, which implies a rescue will soon follow. But that won’t necessarily mean that Sally will go to jail.

The Bold And The Beautiful Spoilers – Leaving In A Rush

Wyatt’s discovery of Flo’s message leads to his insistence that Sally tells him where his high school sweetheart is. It’s natural for viewers to assume that Flo will soon be found and then instantly dish about Sally’s terminal condition lie and the pregnancy plan.

Knowing that her wishful thinking is falling apart and realizing that serious legal consequences are imminent, Sally might choose to flee Los Angeles, California. Doing so could mean that Hope’s character is caught along the way, or leaves for an extended period of time before returning.

B&B Spoilers – Conclusion May Be Delayed

Sally could be stopped by the authorities if Wyatt and Flo contact them. Although an extension of this storyline would be easy to create by having Hope’s character disappear.

The audience would know that Sally’s capture or probable return would follow. If B&B wants to enhance this storyline, the writing staff can write her out for a number of weeks, or months and then have her reappear.

The Bold And The Beautiful Spoilers – Sally Spectra’s Future Unknown

If a lengthy jail sentence results, then Sally would be written out of the show. However, she could always return at some point in the future.

The Bold And The Beautiful Spoilers: Sally Seduces Wyatt, Will Her Baby Plan Work? https://t.co/eL4JjhuIVV pic.twitter.com/0hwJiylYKV

Flo offered Sally a chance to explain herself to Wyatt, with the promise of jail time being avoided. Flo probably plans to turn Sally in no matter what choice she makes, but it’s possible that Hope’s character could talk her way out of imprisonment and remain on the show.

The Bold And The Beautiful (B&B) Spoilers: Zoe Blurts The ‘L’ Word, Zende’s…

The Bold And The Beautiful (B&B) Spoilers: Liam The New Bad Boy In Town –…