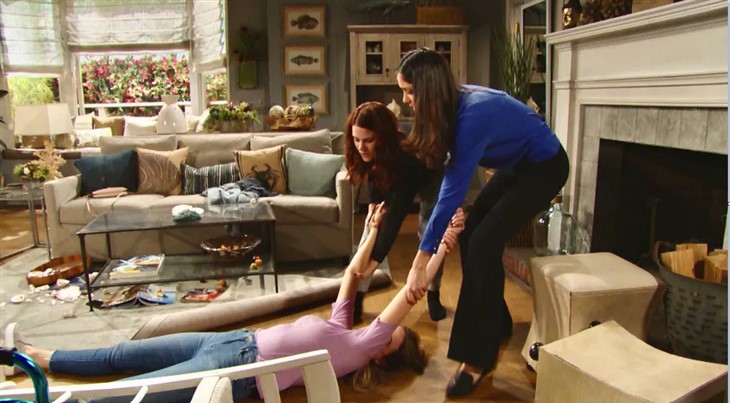 had learned off Sally Spectra’s (Courtney Hope) secret and was ready to expose this to everyone.

She was even able to get Sally to admit to everything before she was knocked out by Penny Escobar (Monica Ruiz). However, she will soon find herself in a sticky situation when she learns just how far Sally and Penny are willing to go to keep their secret a secret. It will seem that Flo will have something up her sleeve in the new episodes. Will she find a way out of this mess or will Sally get away with everything?

The Bold And The Beautiful Spoilers – Flo Fulton’s Secret Message

It seems that in upcoming episodes that viewers will learn what Wyatt Spencer (Darin Brooks) saw when he walked into the home minutes after Flo had been knocked out. Unfortunately, it seems that he will only be walking into the aftermath of the scene rather than walking in on Penny and Sally dragging Flo out.

This will lead to a scene where Flo will wake up tied to the radiator in Sally’s apartment. She will wake up to see what has happened to her and will be shocked to see how far Sally was willing to go to keep her secret from everyone. However, this will not stop Flo from fighting back.

The Bold And The Beautiful Spoilers: Bill Pleads With Katie To Keep Family Together – Steffy's Accident Influences Her? #BB #BOLDANDBEAUTIFUL https://t.co/ab3aTXTmvg

Later on, Sally will try to seduce Wyatt which will lead to him seeing the message and confronting Sally about it. What do you think? Will this note be the key to Sally’s plan being destroyed? Do you think that Sally will come clean? Stay tuned to the CBS soap, and don’t forget to check CTS often for the latest Bold and the Beautiful spoilers, updates, and news.

Days of Our Lives News Updates: Deidre Hall And Her Twin Have An Art Collection For Sale