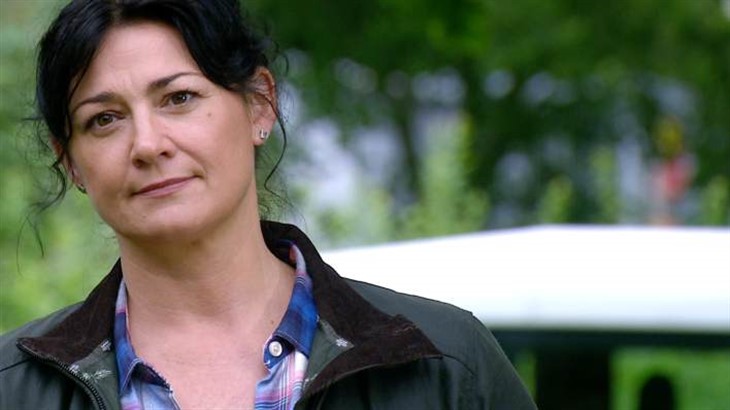 ITV Emmerdale spoilers reveal that Moira Dingle (Natalie J. Robb) learns of a bombshell betrayal. Nate Robinson (Jurell Carter) and Rhona Goskirk’s (Zoe Henry) pact is exposed, which sends Moira into a rage. She intends on taking action but is stopped by Cain Dingle (Jeff Hordley). He has a much better idea. Although Rhona had good intentions, she could pay a high price.

When Moira was having financial issues, she asked Cain for a loan. He refused, but Moira ended up getting an offer from Rhona, who was surprised by receiving an inheritance from Graham Foster (Andrew Scarborough). The two became partners, but as we speculated at that time, it could get complicated. We’ve already seen the two go head-to-head on some issues, but they always worked through it. We have a hard time seeing the women overcome this next issue, though.

Emmerdale spoilers reveal that a client wanted a massive amount of product. Moira said it was impossible to meet those demands, and by herself, she’s right. But Nate had an idea that they could join forces and it would benefit them both. He knew that Moira would never work with him because of the Moira/Nate/Cain history. So, he approached Rhona with the proposition.

Rhona was hesitant and didn’t feel right about the agreement. However, she knew that the business was in the red and if something wasn’t done, Moira would be bankrupt and Rhona herself would be out of her investment. Despite knowing Moira would react badly, she went ahead and made the deal.

There were times when Rhona almost confessed to Moira but always chickened out.

Next week, Moira will be getting closer to Cain and trying to remember details from the night of the accident. Then, Matty Barton (Ash Palmisciano) lets it slip about Nate and Rhona’s deal. Moira is outraged and rages over the bombshell betrayal.

She wants to go immediately to deal with it, but Cain stops her. He has a better idea and suggests Moira take a different approach to the situation. What is he going to suggest and how will it affect Nate and Rhona? Will she be able to explain to Moira that had good intentions? We will have to keep watching the soap to find out!