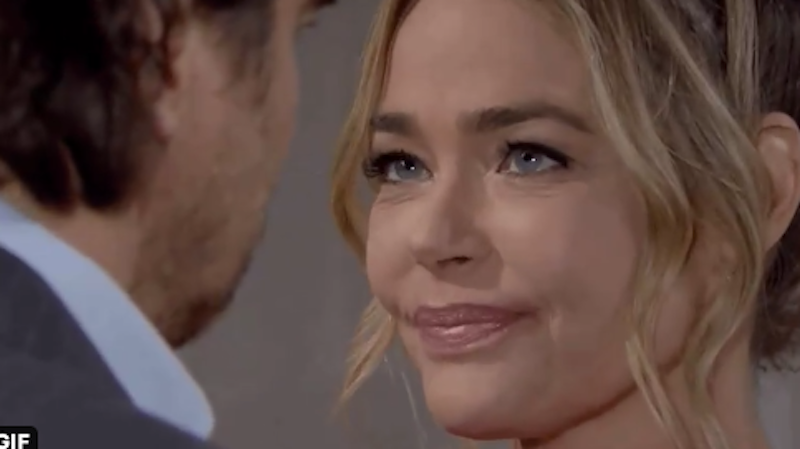 The Bold and the Beautiful Spoilers: Ridge Forrester Came To Shauna Fulton For Comfort

Viewers of The Bold and The Beautiful will recall that Ridge came to Shauna for comfort after his reconciliation with Brooke Logan Forrester (Katherine Kelly Lang) was ruined by Quinn Forrester’s (Rena Sofer) malicious uploading of a video Shauna had herself taken on her cell phone of Brooke and Bill Spencer (Don Diamont) making out in Hope Logan’s (Annika Noelle) cabin to a digital photo frame that Ridge had given Brooke as a gift, later being smashed on the floor in a fit of rage! Quinn later had played it up to Ridge that Shauna didn’t send it to the photo frame and that she was going to delete it but Quinn had retrieved it from her cell phone before she had a chance to because Ridge needed to be warned what he was getting into with Brooke and what she had been doing behind his back, and exaggerated the relationship to it being an affair!

Both Brooke and Bill had denied it was an affair but that it was only a case of being caught up in a moment, although it was a terrible mistake on their parts. Quinn had told Ridge Shauna was leaving Los Angeles and moving back to Las Vegas, and that Shauna wouldn’t hurt him like Brooke had so many times and convinced Ridge to go after Shauna! He made it to Flo Fulton’s (Katrina Bowden) place before Shauna had left, but she told him she could not be a way for him to get over his wife! However, he convinced her to let him go with her to Vegas and so they did.

B&B Spoilers: Ridge Forrester Is Finding In Shauna Fulton Something He Never Had With Brooke Logan

Once Ridge and Shauna get to Las Vegas, he realizes he is finding something in her that he never had with Brooke, and desperately wants – a new start with no prior history to resolve. He is really enjoying “this thing” with Shauna, whatever it turns out to be, because it’s a new and exciting change of pace, there’s no baggage, and when he looks at Shauna, he doesn’t see her making out with someone else behind his back!

There seems to be an innocence built into their relationship that he never found with anyone else including Brooke – Shauna has never taken advantage of him as Brooke and his other previous romances had, and there isn’t the heavy weight feeling to it like there have been with so many of his past relationships. Plus, Shauna understands him without making demands of him that he has to meet, and she likes him genuinely and without expectations. She is finding the same things with him, and because of a genuine friendship having been formed between the two, they are finding a deep connection forming with each other and a feeling of mutual trust.