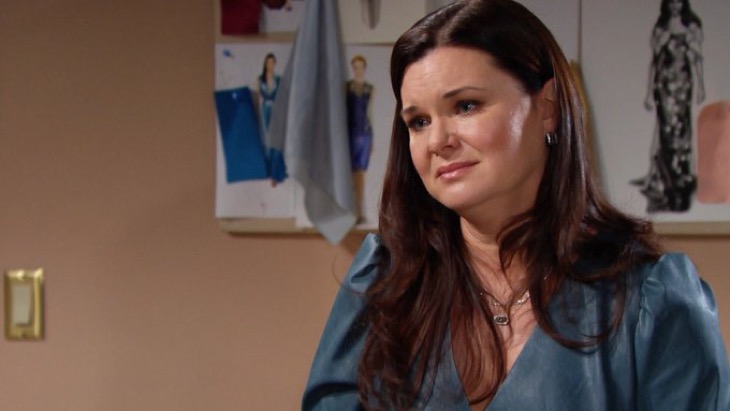 The Bold and the Beautiful (B&B) Rumors tease that Heather Tom (plays Katie Logan) may be leaving the show soon. Heather Tom’s character has hit a wall after learning some devastating news about the kiss between Brooke Forrester (Katherine Kelly Lang) and Bill Spencer’s (Don Diamont). This may lead to the character exiting town, which means that Heather Tom may be leaving the show. Could this be the last that we see of Katie Logan?

The Bold and the Beautiful Spoilers – Katie Logan Wants to Leave

The drama that came about with the reveal of the Bill and Brooke kiss might have more consequences than expected. Many viewers know the history surrounding Bill, Brooke, and Katie and that Katie always ends up hurt when her relationship fails with Bill. However, this is the third time that the relationship between the two has failed, which may become devastating to Katie, who thought that the relationship would work this time.

Being done with both Bill and Brooke, Katie may make a decision to make a clean slate for herself by moving away from all of the drama. This could mean that she will take Will and leave. If this is the case, then how would Bill react to the news that Katie wants to leave with their son?

Bill is still confident that he can fix his family even though he has made the same choice for the third time. However, when he finds out that she is thinking about leaving town, he will do everything in his power to stop her and change her mind.

The Bold and the Beautiful Spoilers: Ridge And Shauna Bond While Brooke Tracks Them To Vegas https://t.co/aXi6u6dVnB pic.twitter.com/28yToBpZfs

On the other, when Katie makes a decision, she will stick to it. Hopefully, Katie will stick around, but with the news of Sally Spectra II’s (Courtney Hope) illness, Katie might have another reason to leave. Katie still thinks that Sally is sick and on the verge of dying. When the news comes out, she may feel that no one will be honest and upfront with her.

It will be interesting to find out if Katie will be leaving the show or staying. What do you think? Could Heather Tom have one foot out of the door? We’ll give you updates as B&B news comes in. Stick with the CBS soap, and don’t forget to check SOS often for the latest Bold and the Beautiful spoilers, updates, and news.

B&B Spoilers: Taylor And Brooke Have It Out