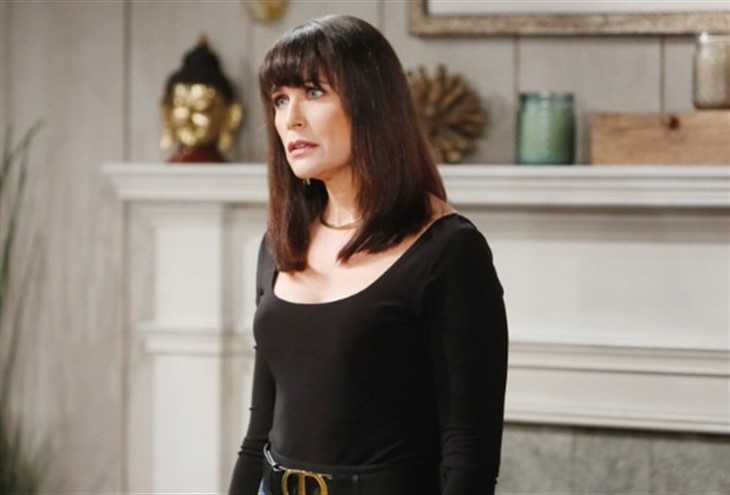 The Bold and the Beautiful spoilers reveal that in Los Angeles Quinn Forrester (Rena Sofer) will still be suspicious of her partner in crime. She decides to investigate and find out what is really going on between Eric Forrester (John McCook) and Shauna Fulton (Denise Richards). What will she discover during her sleuthing? Is it really innocent or is there something more going on?

The Bold And The Beautiful Spoilers – Shauna Fulton’s Secretive Behavior

B&B spoilers reveal that Shauna has been laying low and not really talking to anyone since the wedding fallout. Quinn assumed this was because her best friend needed time to regroup. However, Shauna was also keeping secrets from her daughter, Flo Fulton (Katrina Bowden). Then, Shauna didn’t move out of Eric’s house like she promised. Instead, she continued to stay just because he asked her to. If there was really nothing going on, then why all the secrecy, especially with the daughter she’s so close to?

According to the new issue of Soap Opera Digest, Quinn will remain suspicious of Eric and Shauna. Not wanting to lose her man, especially to her supposed best friend, Quinn puts a plan into motion. She decides that the only way to find out the truth is to look with her own eyes and hear with her own ears.

The Bold And The Beautiful Spoilers – Spying On Eric Forrester

The Bold and the Beautiful spoilers reveal that Quinn will sneak over to the Forrester estate and spy on Eric. Now, Shauna promised Flo, Quinn, and Wyatt Spencer (Darin Brooks) that she would move out. She ended up telling Eric that she had to go because it wasn’t appropriate. Even though he seemed to accept her answer, could she still be staying there? Why else would Quinn spy on Eric and Shauna? Is she keeping it a secret that she’s still staying at Eric’s house? If so, this doesn’t sound like a good situation.

Shauna being so secretive is a big red flag. She might be able to give an excuse about why she kept the truth from Quinn. But why on Earth would she not tell her own daughter where she was staying? Then, there is Eric’s behavior. He was keeping it a secret too, which makes this whole thing very suspicious. It is clear that he still loves Quinn because he has her portrait on the wall.

However, he also seems very lonely and might just want Shauna around for the company. But he needs to make up his mind — either end his marriage or take her back. Don’t string her along while hiding another woman on the property.