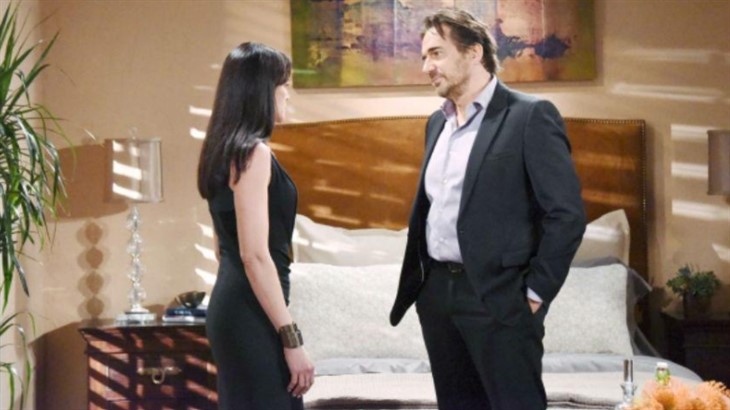 CBS The Bold and the Beautiful spoilers for the week of September 28 reveal that Quinn Forrester (Rena Sofer) gets her way. She suggested a “wedding do-over” to Ridge Forrester (Thorsten Kaye), but he was suspicious of her motivations. Despite him not wanting to hurt Brooke Logan Forrester (Katherine Kelly Lang), he eventually agrees to marry Shauna Fulton (Denise Richards) again.

The Bold And The Beautiful  – Quinn Forrester’s Suggestion

B&B spoilers reveal that Quinn told Ridge that it would be just the most splendid idea if he would give Shauna a “wedding do-over” and invite everyone they know to attend. When Ridge questioned her motivations, Quinn couldn’t help but let it slip that “especially Brooke” should there. Now, viewers know what her true agenda is, but it seems that Ridge is going to end up being fooled by her.

Despite initially having reservations about Quinn’s idea, she will continue to push it. The soap villain will not give up until she gets what she wants and can gloat about it. Ridge will end up agreeing to give Shauna a “real” wedding, even though he’s not in love with her. Then, he goes to tell Brooke all about it and she is “tormented” by the idea of him marrying Shauna. Unless she comes up with proof that Quinn and Shauna are scheming, then Shauna is going to take her place.

The Bold And The Beautiful  – Shauna Fulton Gets Second Wedding

The Bold and the Beautiful spoilers reveal that Shauna will be absolutely thrilled when Ridge says he will marry her again. In a preview photo published in the new issue of Soap Opera Digest, he looks like he is making her dreams come true. Shauna is grinning gleefully as Ridge tells her his decision. However, not everyone is on board with the idea.

Brooke isn’t the only person that will be horrified and stunned by Ridge marrying Shauna again. Eric Forrester (John McCook) will be upset by the news. Once again, Eric will try to talk some sense into Ridge before he makes a horrible mistake.

However, will he end up being successful at stopping the wedding ceremony? We will have to keep watching the CBS soap opera to see what happens with this storyline.

Be sure to catch up on everything happening with B&B right now. Come back here often for The Bold and the Beautiful spoilers, news, and updates