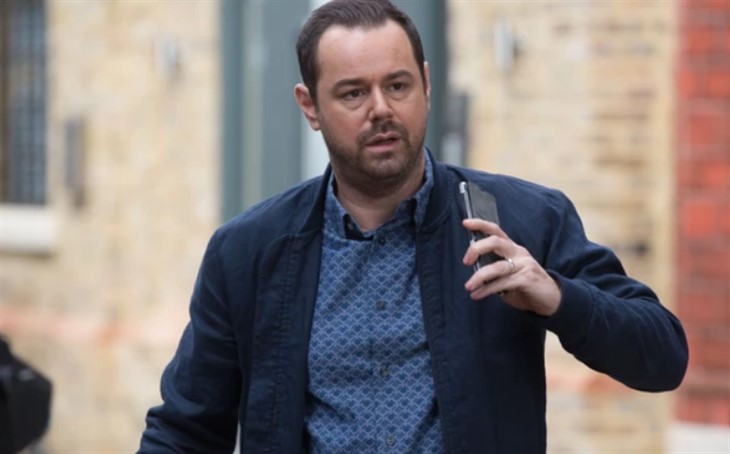 BBC Eastenders spoilers for the week of October 5 reveal that Mick Carter (Danny Dyer) will demand answers while the secrets between one couple will fester. Whitney Dean’s (Shona McGarty) trial begins and she is grilled by the prosecution. Meanwhile, Chantelle Atkins’ (Jessica Plummer) funeral day arrives and Phil Mitchell (Steve McFadden) has a special request.

Eastenders spoilers two weeks ahead reveal that on Monday, October 5, Mick will demand answers. This is most likely referring to Frankie Lewis (Rose Ayling-Ellis). As fans have seen, Frankie keeps taking lots of pictures of Mick and Linda Carter’s (Kellie Bright) son, Ollie Carter (Harry Farr). Mick will start to notice all the pictures and ask Frankie to delete them. He also becomes suspicious when she won’t stop asking questions about his family.

Also, Jags Panesar (Amar Adatia) will make a huge confession to his family.

Viewers can expect secrets to fester between Mick and Linda, which puts a strain on their marriage. The fact that Frankie is seemingly obsessed with Ollie for some reason is an additional concern. Plus, Linda will have relapsed during a pub event and ends up confiding in Max Branning (Jake Wood). All of this combined could have a negative impact on the couple.

On Thursday’s episode, it is the day of Chantelle’s funeral and Gray Atkins (Toby-Alexander Smith) finds himself getting overwhelmed. He has to make a choice between attending his wife’s funeral or going to court to defend Whitney as her trial begins. Which decision will he make and will anyone ever find out the truth about what really happened to Chantelle?

EastEnders Spoilers: Kheerat And Mitch’s Moment, Both Failed To Save Chantelle https://t.co/fYmkv70QtF pic.twitter.com/nu6WlsX7W9

Eastenders spoilers for Friday reveal that in court, Whitney is grilled on the stand. Plus, Billy Mitchell (Perry Fenwick) can’t help but be concerned about the distance between himself as Karen Taylor (Lorraine Stanley). Also, Kush Kazemi (Davood Ghadami) will end up saving the day. However, he is also keeping a big secret.

Which storyline are you looking forward to seeing the most during the week of October 5? What do you think is going to happen with your favorite characters? Do you have any predictions or hopes for the direction of the storylines?