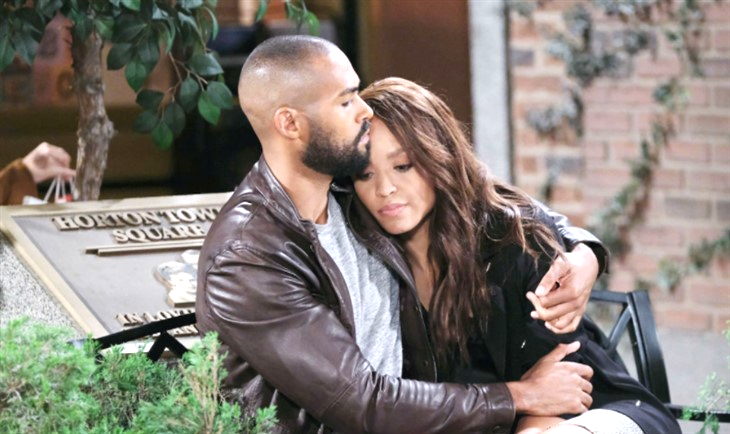 NBC Days of Our Lives spoilers for the week of September 28 reveal that Eli Grant (Lamon Archey) gets interrogated by DA Melinda Trask (Tina Huang). She wants information on Kristen DiMera (Stacy Haiduk) in order to make a conviction. However, Eli gets put in a tough spot and he warns Lani Price Grant (Sal Stowers) that her past could come back to haunt her. Will she pay a high price?

DOOL spoilers reveal that Trask is determined to make Kristen pay. Even though Haley Chen’s (Thia Megia) death was ruled an accident, Trask never got justice for what happened to her daughter. So, she is using Victor Kiriakis’ (John Aniston) stabbing to make sure that Kristen pays the price. Trask will start by questioning Eli, which puts him in a really tough spot. Even though he promised Lani that he wouldn’t contribute to Kristen going down anymore, he is keeping a big secret.

He knows that Kristen confessed to Lani off-the-record. The more that Trask pushes, the more inclined Eli might be to make a decision. If he exposes Kristen’s confession, then he also throws his wife under the bus. But lying goes against everything he believes in and if Trask finds out, he could lose his job.

After Trask questions Eli, he gives Lani a grim warning. Trask is digging and won’t stop until she finds out everything. Even though Lani is committed to protecting her best friend, it could lead to the pregnant detective facing consequences. Is she really prepared for all the fallout when the truth comes out?

Days of Our Lives spoilers reveal that Lani will want to protect Kristen at any cost. It was previously teased by head writer Ron Carlivati to Soap Opera Digest that Lani’s actions… or inactions… could put “Elani” in a compromising position. It sounds like Lani isn’t done helping Kristen yet and this could have negative repercussions.

Days Of Our Lives Spoilers: Ben And Hope Track Down Vincent, But What About Ciara? https://t.co/O9mpPK4LG4 pic.twitter.com/5tmm802NxA

If Trask finds out that Lani is hiding the fact that Kristen confessed, what kind of consequences could she face? This goes beyond just losing her job. Lani could actually go to prison for aiding and abetting a fugitive. Is this a chance she is really willing to take, especially since she is pregnant with twins?