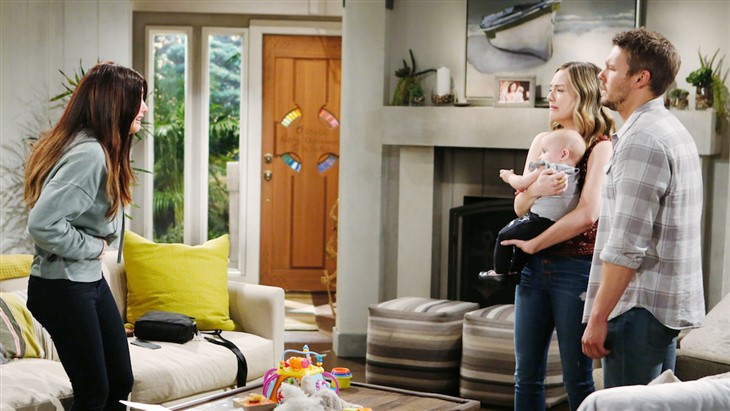 The Bold and the Beautiful spoilers document that Liam Spencer (Scott Clifton) feels compelled to take his daughter from the cliff house. Steffy Forrester’s (Jacqueline MacInnes Wood) discovered addition issue exploded in the cliff house when Liam found a bottle of unmarked pills.

The majority of Liam’s instincts are right, with Steffy being in trouble and Kelly Spencer (Avalon and Colette Gray) being endangered. However, his belief that Dr. John Finnegan (Tanner Novlan) provided the medication is wrong.

TheBold And The Beautiful Spoilers – Letting Off A Lot Of Steam

Liam and Steffy’s history is well known by hardcore B&B fans. Newer fans or those who aren’t familiar deserve a brief refresher.

Steffy and Liam have been married three times, but aren’t currently together. They were going to have a baby years ago, but a motorcycle accident caused Steffy to miscarry their son. During the later part of the last decade, Steam had a baby girl, who they named Kelly, in honor of Liam’s deceased mother.

Liam is married to Steffy’s rival, Hope Spencer (Annika Noelle). Lope has been helping to take care of Kelly during this period of recovery. But Liam’s recent concerns about Steffy’s well-being and the objectivity of her doctor, Finn, led to the scene at the cliff house, where a photo of Steffy and Liam still hangs above the mantel.

Steffy is a good mother, as Liam knows. However, the intense pain she’s been enduring has caused her to act in highly unusual ways. Along with that, she made a reckless choice in accepting the unlawful substances Vincent Walker (Joe Lo Cicero) forwarded to her.

The role Thomas Forrester (Matthew Atkinson) played in unknowingly facilitating that delivery will surely be highlighted by Liam as this intense storyline continues to unfold. In the meantime, Liam has protected Kelly from potential danger and he’s also forced Steffy to begin to acknowledge the seriousness of this situation. Though, as teasers indicate, Steffy won’t revert to stability quickly.

Great acting is great acting. The manner in which Wood has portrayed the slow, steady devolution of Steffy is stellar. Her physical movements, related to the pain, are believable, and her heightened defensive posture is breathtaking to watch.

Clifton, Wood’s longtime scene partner, has skillfully ramped up Liam’s standard deep analysis into crisis, action mode. No vacillating now. Instead, Liam is on it and Steffy will eventually be thankful when the fog lifts.