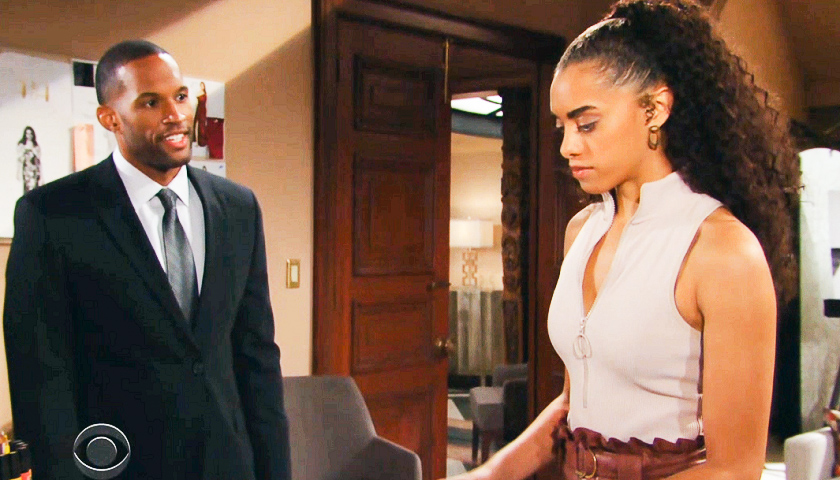 CBS The Bold and the Beautiful spoilers for the week of October 26 reveal that Carter Walton (Lawrence Saint-Victor) and Zoe Buckingham (Kiara Barnes) get intimate. However, the Los Angeles love triangle story is probably not over yet. Will Carter end up being betrayed or will Zende Forrester Dominguez (Delon de Metz) not cross that line?

B&B spoilers reveal that Carter is falling hard and fast for Zoe. Even though they have only been seeing each other for a short time, Carter already wants her to move in. In just two weeks, he will want to take another big step in their relationship and get intimate. Zoe agrees to sleep with Carter, but she probably still has Zende on her mind.

Carter and Zoe seemed to be enjoying each other’s company until Zende showed up. Suddenly, the model is flirting with Zende and can’t seem to stop thinking about him. She justifies her behavior by saying her current romance has no label on it. However, it’s clear that Carter is head over heels for her. If she doesn’t feel the same way, then she needs to be completely honest.

Meanwhile, Zoe and Zende will continue to get closer. Barnes teased to Soap Opera Digest that the two are “kindred spirits” and no topic is off-limits. They even have discussions about Carter.

The Bold and the Beautiful spoilers reveal that the love triangle is supposed to heat up. Plus, a situation like this is never resolved quickly in soaps. So, it is definitely going to continue to be an issue. Even though Carter seems to notice that Zoe and Zende are oddly close and “have their own language,” he doesn’t suspect anything more.

Carter always seems to get his heartbroken and it’s horrible because his character is truly a good guy. The longer that Zoe tries to hide the truth from him, the more that it will hurt when it comes out. Even though Zoe and Zende haven’t crossed any lines yet, could they eventually give in to temptation?

How long will Carter be in the dark for and what could something like this do to his friendship? Will Zoe end up regretting it later on? We will have to keep watching the CBS soap opera to see how this story progresses.