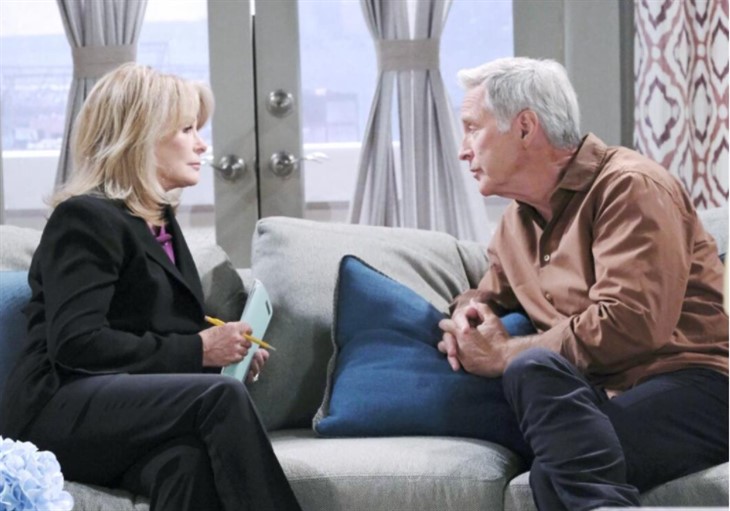 NBC Days of Our Lives spoilers for the week of October 19 reveal that Dr. Marlena Evans (Deidre Hall) will desperately try to calm down her husband. Ever since his surgery, he lashes out suddenly and has unexpected outbursts. We will see his rage go from verbal to physical. Meanwhile, in Salem Marlena will try to calm down J Could his actions lead to an arrest?

DOOL spoilers reveal that John had an aneurysm and underwent surgery. The doctors warned that they wouldn’t know anything about John’s prognosis until he woke up. Well, he finally regained consciousness, but there are some changes in him. He has an uncontrollable rage that comes and goes. He can be having a normal conversation one minute, then explode the next. At first, it was just verbal, but his rage is now becoming physical.

Things will get even worse when word gets to John that Allie Horton (Lindsay Arnold) is accusing Tripp Dalton (Lucas Adams) of rape. He ends up trying to attack Tripp multiple times. He does eventually succeed and manages to punch Tripp in the face. However, it could go beyond that as there is a rumor that a beaten and bloody Tripp ends up hospitalized. If this is true, then could John be responsible?

Days of Our Lives spoilers reveal that during the week of October 19, Marlena will desperately try to calm down her husband. It seems he has another violent explosion. It was previously teased by head writer Ron Carlivati that things could get very bad for John. He told Soap Opera Digest a few weeks ago that John’s mood swings would create serious consequences.

One of those consequences could mean John’s actions turn into a legal issue. If Tripp really does end up in the hospital after being attacked, then the police will investigate. With his unpredictable rage and Allie being his granddaughter, John will be the prime suspect. Plus, with him punching Tripp in public, John just might find himself in handcuffs.

What do you think the serious consequences are for John Black’s unpredictable rage? Will he end up getting arrested after attacking Tripp Dalton? We will have to keep watching the NBC soap opera to see how this story develops.