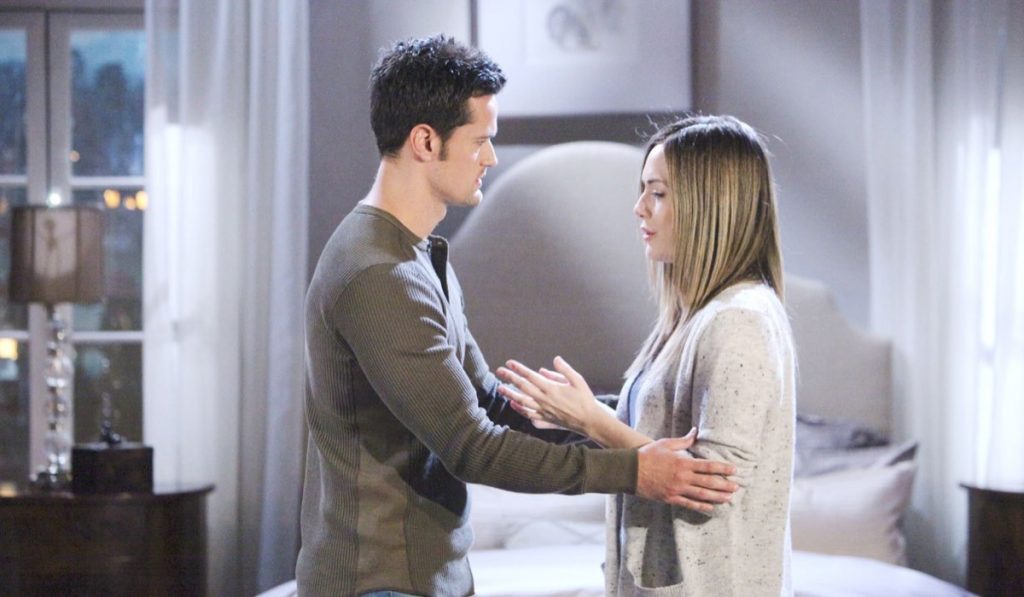 The Bold and the Beautiful (B&B) spoilers for Monday, January 27, tease that some great drama’s on the way. However, we should note that impeachment trial coverage has been affecting B&B’s schedule lately. That trend will likely continue next week, so just keep in mind that more episodes may be pushed back.

Now let’s talk about some exciting scenes. For starters, Steffy Forrester (Jacqueline MacInnes Wood) will find herself feeling torn. At home, Steffy will return from hanging out at the beach with Liam Spencer (Scott Clifton) and Kelly Spencer (Zoe Pennington). While Kelly’s asleep, Steffy will admit it’s been really nice having Liam around more.

Steffy will reflect on how Liam’s been able to wake up with Kelly and make breakfast there with them. She’ll cherish these family moments, but she’ll hate what Liam’s going through. Liam won’t blame Steffy for the kiss they shared, but Steffy will admit that he should – and she’ll suggest Hope Logan (Annika Noelle) should, too.

Steffy will insist there’s something Liam needs to know about that kiss. She’ll be prepared to come clean about Thomas Forrester (Matthew Atkinson) nudging her into it and making sure Hope saw it. Steffy’s guilt will really be eating away at her, but Thomas will throw off her confession plans soon enough.

Speaking of Thomas, he’ll be ecstatic when Hope lets him comfort her over her breakup. Hope will vent about what went down between Steffy and Liam before Thomas offers support. He’ll eventually embrace Hope and love every second he’s close to her.

Next, Wyatt Spencer (Darin Brooks) will speak with Quinn Forrester (Rena Sofer) about trying to break up with Sally. He’ll be concerned about Sally’s reaction and how she’s holding up. Quinn will be pleased about Wyatt moving on with Flo, but Wyatt won’t think he can just stop caring about Sally and her well-being.

The Bold and the Beautiful Spoilers: Wyatt At A Crossroads – Should He Pick Flo Or Sally? https://t.co/ib4P8JuCPi pic.twitter.com/btkcUnAd14

Finally, Sally will have a troubling encounter with Flo. She’ll confront her rival about Wyatt, but her recent symptoms will return and leave her unsettled. The Bold and the Beautiful spoilers say Sally will get shaky during this faceoff. She’ll leave Flo wondering if she’s all right, but Sally will try to power through and get her point across.

Sally will hope that Wyatt can remember why they fell in love. She’ll think he can use this time to get his head on straight, but Flo won’t understand where Sally’s coming from. She won’t get why Sally would want to be with someone who doesn’t feel the same.

Nevertheless, it’s Sally’s symptoms that’ll be her biggest problem in the coming episodes. She’ll eventually get those checked out by a doctor – and it’s a good thing! The Bold and the Beautiful spoilers say Sally will soon receive a devastating diagnosis. We’ll give you updates as other B&B news and rumors emerge. Stick with the CBS soap and don’t forget to check back often for the latest Bold and the Beautiful spoilers, rumors, updates, and news.