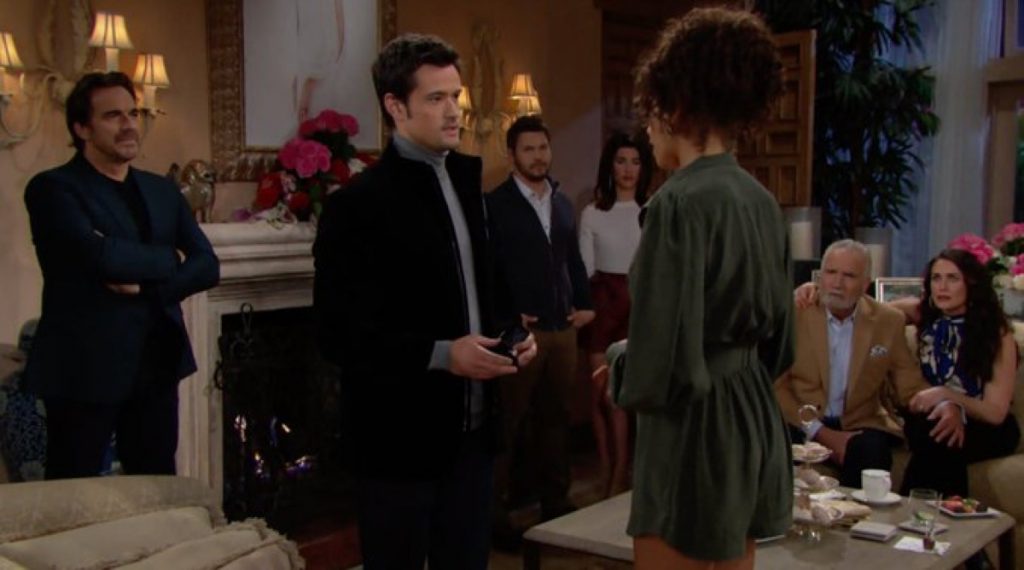 The Bold and the Beautiful Spoilers – Thomas Forrester’ Proposal

At the Forrester mansion, Zoe and everyone else is stunned when Thomas proposes to her. A concerned Hope watches Douglas as everyone awaits Zoe’s answer. Zoe informs Thomas she can’t accept his proposal until he tells her that he loves her.

Thomas says it’s hard for him to express his emotions, but he finally tells Zoe the three little words she wants to hear. An emotional Zoe cries and accepts Thomas’ proposal. As they kiss, Douglas runs up the stairs and Hope chases after him.

The guests at the party are floored by Thomas and Zoe’s engagement. Liam Spencer (Scott Clifton) comments that Thomas is using the proposal to get what he wants. As Liam and Brooke quietly whisper about the engagement and Douglas, Zoe asks Thomas if they’re rushing things in their relationship. Thomas reassures Zoe that he loves her and she’s happy to start their new life together.

Ridge Forrester (Thorsten Kaye) hugs Zoe, while Brooke confronts Thomas about how he doesn’t care about Douglas. Liam tells Thomas it’s wrong using Zoe and Douglas as part of his plan and promises to stop him.

Upstairs in Douglas’ bedroom, Hope tells the boy she didn’t know that Thomas wanted to get married to Zoe. Douglas says he doesn’t want Zoe as his mom, he wants Hope. The two hugs, then Douglas says he thinks Thomas and Hope should be together. Hope says they tried once, but it didn’t work out so well. An upset Douglas refuses to call Zoe “mommy,” and Hope promises she’ll still be part of Douglas’ life. Douglas mentions that the same thing his first mommy said. Douglas says he doesn’t want to lose Hope and suggests she marry his dad.

Meanwhile, downstairs Brooke tells Zoe that Thomas doesn’t love her and advises the girl to get as far away from him as she can. Zoe tells Brooke she’s going to be a Forrester. Brooke yells at Zoe to realize what’s happening, Thomas is using her as a plot to get Hope. An irritated Zoe tells Brooke that Hope’s not that special to everyone and that Thomas’ infatuation with Hope is in the past.

Ridge is chatting with Thomas about the proposal and how it seems so sudden. Thomas says this is the future he envisioned for himself. Ridge asks if his future will be with Zoe or Hope. Eric Forrester (John McCook) joins them and wants to know the answer as well. Thomas says this is his way of getting over Hope and he’s moving on with Zoe.

Liam is talking with Steffy Forrester (Jacqueline MacInnes Wood) and trying to convince her to see the proposal from his perspective.

Thomas is going upstairs when Zoe and Quinn Fuller (Rena Sofer) ask him if he’s okay. Thomas says he’s going to check on Douglas. As Thomas is going up, he overheard Zoe talking about how happy she is.

Thomas is standing outside Douglas’ bedroom when he overheard the boy’s suggestion that Hope marries his dad. Thomas comes into the room as Hope looks up at him.

Be sure to catch up on everything happening with B&B right now. Come back here often for The Bold and the Beautiful spoilers, news, updates, and rumors!