The Bold and the Beautiful Spoilers Friday, February 21: Zoe Makes A Request Of Thomas – Douglas Makes Emotional Plea To Hope 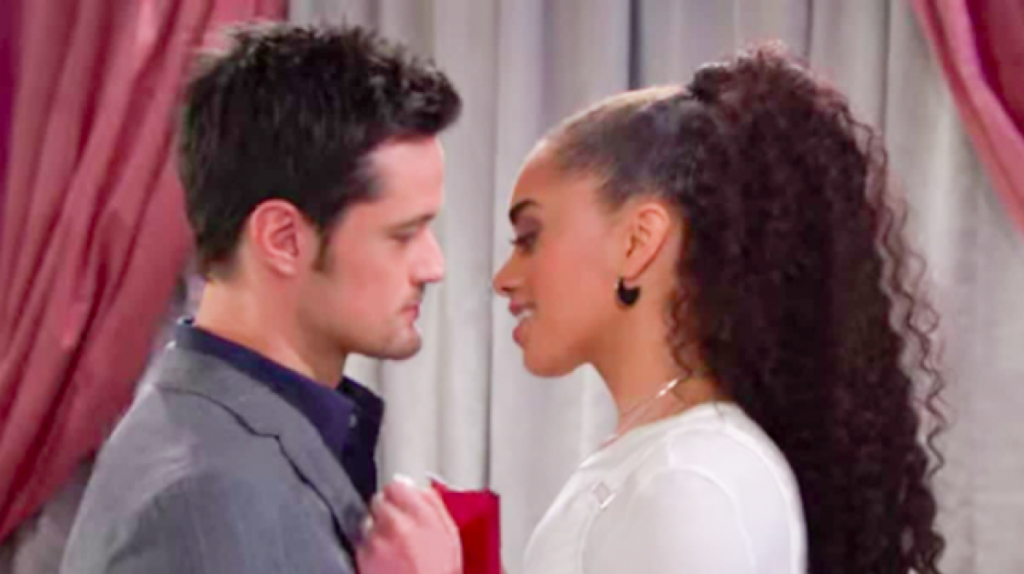 The Bold and the Beautiful spoilers for Friday, February 21, tease that Thomas Forrester (Matthew Atkinson) will anxiously wait for an answer from Zoe Buckingham (Kiara Barnes). As B&B viewers know, he’s just asked her to marry him in front of everyone at the Forrester family dinner, and now he’s waiting for her reply. But it seems that he won’t be prepared for the answer he gets.

According to the Bold and the Beautiful spoilers, Zoe won’t give him an immediate “yes” answer. Rather, she’ll turn the tables on Thomas and will make a public request of him before she’ll even consider saying yes to the marriage proposal. But what could the request be?

Well, it could have something to do with Douglas Forrester (Henry Joseph Samiri). As B&B viewers know, it just doesn’t seem like Douglas is ready to see his father get married, and surely Zoe has noticed that. Douglas always seems to be glum and unhappy when she’s around, so she might tell Thomas that he needs to get Douglas onboard with their union before she says yes.

We just might see Zoe say that as long as Douglas approves and will accept her, then she’ll say yes. Or she could have some other request of Thomas – B&B viewers will have to tune in to see!

Meanwhile, on Friday’s new episode of B&B, Douglas will have his own reaction to his father’s proposal to Zoe. As B&B viewers could see, Douglas wasn’t happy about his father proposing marriage to someone other than Hope Logan (Annika Noelle). Douglas might have a public meltdown, or maybe he’ll go running out of the room, but whatever the case, he’ll get some comfort from Hope.

And when he does, B&B spoilers say that Douglas will make a big emotional plea to Hope. Chances are, he’ll ask her to stop his father from marrying Zoe, and he will probably tell Hope once again that he wants her to be with his father, and not Zoe. That’s going to seriously tug at Hope’s heartstrings, which will be exactly what Thomas wants.

The Bold and the Beautiful Spoilers: Thomas Proposes To Zoe – Will She Realize She’s Being Used? https://t.co/zd1gmwXxw5 pic.twitter.com/RmNNOmiQSG

The Bold and the Beautiful spoilers also say that Douglas will tell Hope a secret that he’s been keeping as he’s making his emotional plea to her. Could Douglas possibly spill the beans that his father wanted him to tell her all about how he wants the two of them together? Or perhaps Douglas will have another secret to disclose – maybe he’ll share that he wants to be a family with her, Thomas, and Beth Spencer (River Davidson and Madeline Valdez).

Whatever the case, Hope’s going to have a lot on her hands as she tries to deal with an upset Douglas and perhaps her own jealousy over Thomas’ proposal. She’ll likely be very worried about Douglas, but will she be worried enough to tell Thomas that he needs to cut things off with Zoe?