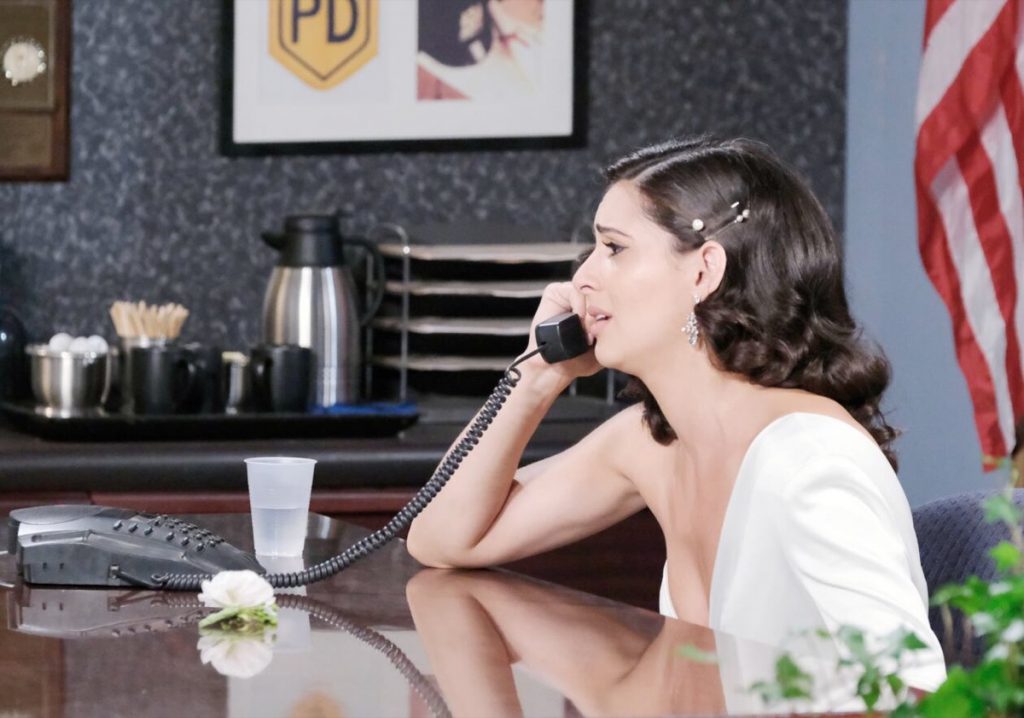 Maggie Kiriakis’ (Suzanne Rogers) memories were likely triggered by her conversation with Will Horton (Chandler Massey) in last Thursday’s episode, as she starts to have short flashes of memory of the night that Adrienne Kiriakis (Judi Evans) died.

They are just short flashes, and they are very confusing for Maggie. She can’t quite put them together with events that she remembers more fully. However, the more she thinks about the flashes – her memories start to return. She remembers Adrienne in her car on the road with her daughter Sarah Horton (Linsey Godfrey) in the passenger seat, and she remembers herself driving on the same road, at night! She struggles with the grim reality that if she wasn’t there, she couldn’t remember those details!

Gabi Hernandez DiMera (Camila Banus) who is under arrest for attempted murder for trying to kill Julie Williams (Susan Seaforth Hayes) by controlling her heart rate through her pacemaker using an app on her phone, uses a stunning revelation to her advantage when Eric Brady (Greg Vaughan) and Sarah Horton (Linsey Godfrey) come to the police station to ask her a huge favor!

It turns out that Gabi is a donor match for baby Mackenzie “Mickey” Horton (Josephine and Rosalind May). Gabi tells Eric and Sarah she will agree to donate bone marrow if they can talk the district attorney into giving her a deal to drop the charges! That’s a big ask, but Eric thinks maybe he can convince the DA, considering the extenuating circumstances.

Ben Weston (Robert Scott Wilson) and Ciara Brady (Victoria Konefal) are separated again as he’s escorted back to prison by Detective Rafe Hernandez, (Galen Gering) who came after Ciara knocked him out with a baseball bat! She told Ben to run, while she stayed behind to make sure Rafe was okay.

Rafe was well within his rights to take Ciara to the police department as well because she has aided and abetted a fugitive, not to mention knocking out the Police Commissioner, who he has taken over the role of after discovering Ciara’s mother, Hope Brady (Kristian Alfonso) was turned into Princess Gina Von Amberg (Kristian Alfonso)!

Rafe brings Ciara in, where District Attorney James Giddens (Terrell Tilford) threatened to charge her with aiding and abetting a fugitive, but before she has a chance to say a word, Ben came in on his own and turned himself in. He is then escorted back to the prison and processed back in, as Ciara remains in the Salem Police Department.

Victor Kiriakis (John Aniston) pressures Will Horton (Chandler Massey) not to expose Maggie for her part in the accident that killed Adrienne, knowing that Ciara has told Will. Will has been struggling with whether to keep quiet or to tell the truth, which Victor and Xander Kiriakis (Paul Telfer) confessed to Ciara and then to him.

Maggie had been in to see him and he had talked to her and questioned her also about that night, as previously mentioned, knowing that he could possibly save his marriage to Sonny Kiriakis (Freddie Smith) if he told the truth that he knows!