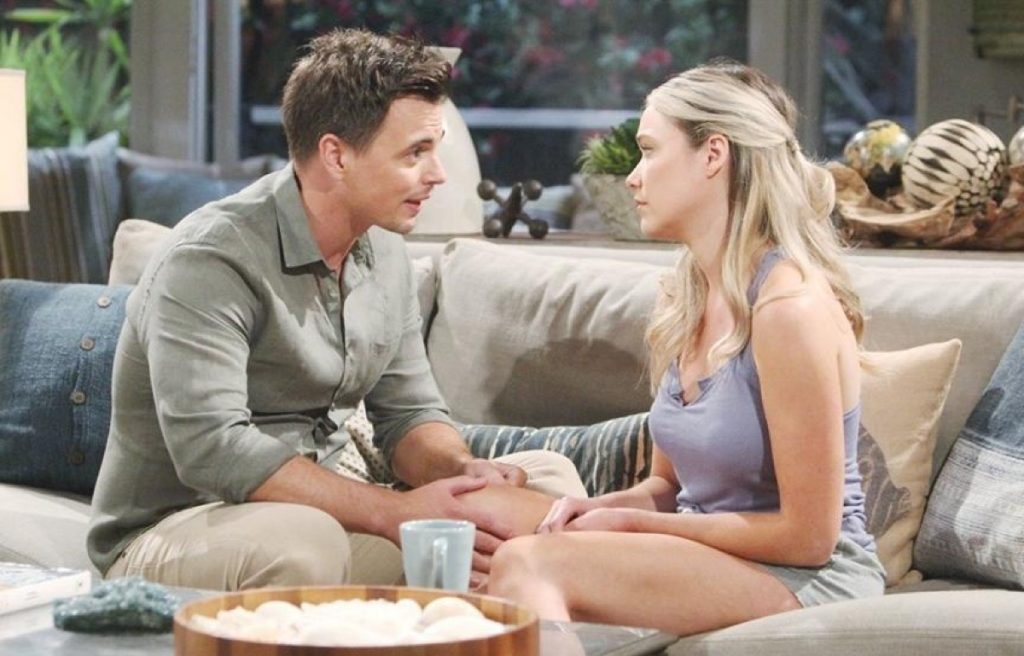 The Bold and the Beautiful spoilers for Monday, February 17, tease that Flo Fulton (Katrina Bowden) will offer her support to Wyatt Spencer (Darin Brooks). As B&B viewers know, Wyatt just told Flo about Sally Spectra’s (Courtney Hope) condition, and Flo was shocked to hear that Sally had just a month left to live.

Flo also told Wyatt that he knows what he needs to do, indicating that she thinks that Wyatt should go back to Flo and support her during her final weeks of life. Wyatt will probably appreciate Flo’s offer and her sentiment, but he’ll probably be reluctant to try to fake a reunion with Sally. After all, Sally’s quite sharp, and she’d probably pick up on what Wyatt was doing.

But then again, Sally really doesn’t have anyone, and what Wyatt wants to do more than anything right now is to be there for Sally and support her like a good friend. As B&B viewers know, things are complicated by the fact that Sally doesn’t know that Wyatt knows about her condition.

Flo might insist that the only real solution here is for Wyatt to go spend his time with Sally during the time she’s got left. Of course, Wyatt won’t want to hurt Flo, but it looks like Flo might have her mind made up, especially since Sally doesn’t seem to have anyone else to support her right now, other than Katie Logan (Heather Tom).

Next on Monday’s new episode of the Bold and the Beautiful, there will be some major confrontations going on at Forrester Creations. As B&B viewers know, Liam Spencer (Scott Clifton) and Thomas Forrester (Matthew Atkinson) are in a middle of a heated argument. Liam has just confronted Thomas about using Zoe Buckingham (Kiara Barnes) and Douglas Forrester (Henry Joseph Samiri) to further his plan to eventually get Hope Logan (Annika Noelle).

B&B spoilers say that as they are arguing, Zoe and Hope will arrive on the scene, and they’ll overhear part of the argument. It looks like they’ll arrive just in time to hear Liam recounting all of the ways that Thomas is using Zoe and a full explanation of why he’s using her.

The Bold and the Beautiful Spoilers: Scott Clifton’s Son Looks Just Like His Twin! https://t.co/Yiu1viC5vW pic.twitter.com/Fn5Et9uXrJ

It also seems that Hope will confront Liam about everything he’s said as well. Liam will desperately try to get Hope to realize that Thomas is manipulating her and that he only wants to be with her again. He’ll even point out that Thomas’s plan seems to be working. But Hope will fire back that even if she and Thomas were together, at least she’d know that he wasn’t out kissing other women behind her back.

That will have to sting for Liam, and one wonders if Thomas will overhear that exchange. He’ll certainly be overjoyed if he does because all Thomas wants is for Hope to turn away from Liam and turn towards him, and it certainly looks like he’s making inroads on that front.