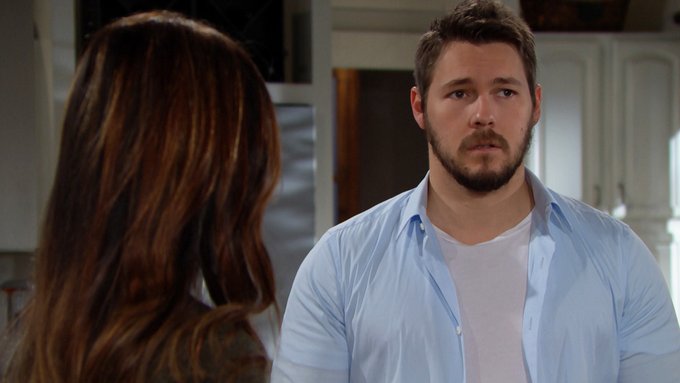 The Bold and the Beautiful spoilers tease that Liam Spencer (Scott Clifton) is in the dark. He isn’t aware that Thomas Forrester (Matthew Atkinson) provided Steffy Forrester (Jacqueline MacInnes Wood) with intel about Hope Logan (Annika Noelle). Without that, Steffy likely wouldn’t have embraced Liam, let alone kissed him.

The epic arc that had Liam and Hope believe their baby died in childbirth is still fresh, as that storyline’s ripple effects are part of this developing tale.

In a surprising twist, Steffy has, at least temporarily, become part of Thomas’ plot. Atkinson’s character is intent on getting Hope back. Now, with his sister’s accompaniment, it just might happen.

Bold And The Beautiful Spoilers – Is Lope Really Over?

Sure, Liam and Hope could reconcile a year from now, later in the decade, or at any point thereafter. But the question that heads this section asks readers to consider if Lope won’t get back together any time soon?

Hope last split with Liam under sad circumstances. She felt an obligation to protect Douglas Forrester (Henry Joseph Samiri), not to leave Liam at that time. So, Hope married Thomas.

At this point in the plot, Hope is doubly distanced from Liam because of his initial request that she cut her legal tie to Douglas, in order to block contact with Thomas. She also was floored to see Liam kissing Steffy the day after he proposed that Lope get remarried.

The Bold and the Beautiful Rumors: Does Sally Have A Brain Tumor? Her Doctor Has The Answers https://t.co/8tw5lqnhXX pic.twitter.com/AzNXJQHF3J

Bold And The Beautiful Spoilers – Thomas Forrester’s Comeback Is Tenuous

What Thomas wants, Thomas gets. But what Atkinson’s fixated character realizes hasn’t lasted.

Hope dropped Liam, which is rather incredible considering the Beth Spencer (Madeline Valdez and River Davidson) steal and reveal that played out so dramatically on both ends of that bookended storyline last year.

While Thomas believes that momentum is in his favor, this victory could be temporary. Hope’s feelings are raw and could easily be reconsidered if she learns the full story of what actually happened at the cliff house.

Bold And The Beautiful Spoilers – Liam Spencer Has Initial Obligation

It’s not as though Hope is Liam’s sole alternative. More than being just a romantic option, Steffy is the mother of his first child, Kelly Spencer (Zoe Pennington and Allison Marcia Sweeney).

Liam’s obligation to his first-born daughter was something he was already pondering before the latest drama happened. So, that bond naturally leads viewers to believe that Steam might be more than a possibility as Lope either separates, or truly ends.