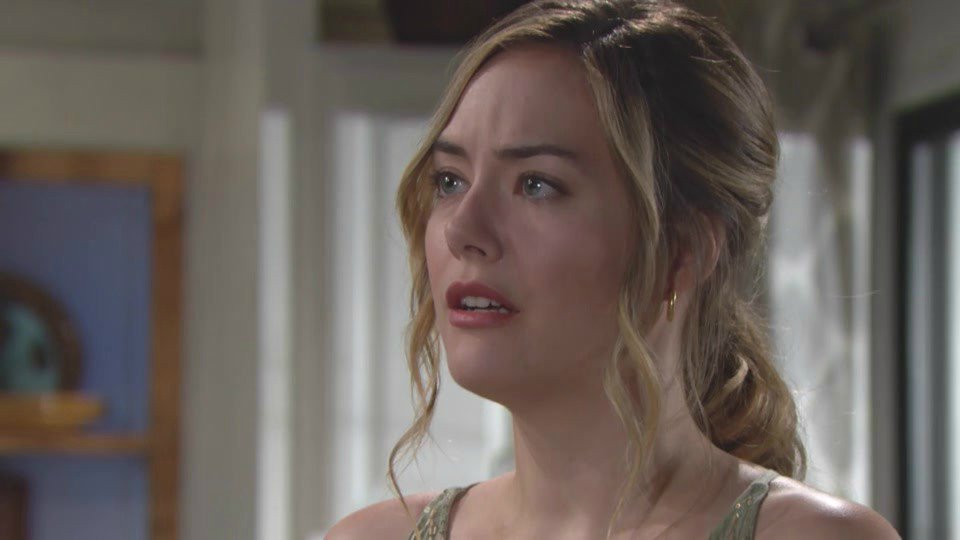 As viewers of The Bold and The Beautiful will recall, Thomas Forrester (Matthew Atkinson) maneuvered things so that Hope would see Liam and Steffy kissing, and Thomas was hiding and watching the whole time! Hope had refused Liam’s ultimatum for their getting married, at least the part that involved cancelling Thomas and her co-parenting agreement of little Douglas Forrester (Henry Joseph Samiri) because he is a child, and vulnerable. She refused to abandon Douglas, and then Liam walked out and spent the night on Steffy’s couch, although Hope probably didn’t believe it when she saw them in the backyard of Steffy’s house, and Steffy was in lingerie! Hope started to cry, then she got mad, then she confronted Liam and told him she couldn’t live like that anymore and basically told him good riddance!

The Bold and the Beautiful Spoilers: Hope Logan Goes To Talk To Her Mother

Hope goes to talk to her mother about what she saw, and what happened the night before. In Hope’s eyes, since Hope wouldn’t give up being a mother to Douglas, Liam walked out on her and their baby and went back to Steffy, who he obviously was still in love with and apparently toying with her. Thomas had a valid point that no engagement had ever been discussed after months and months of living together, and then when he did propose it was with an ultimatum that Hope couldn’t live with! It was like Liam’s hate for Thomas outranked his love for her! She wants to marry Liam, she loves Liam, and she told Liam that but he won’t budge on his ultimatum!

Brooke will probably see Liam’s point, but not his trying to force Hope to give up any relationship with Douglas; she will be of the opinion that Douglas needs protection from Thomas as well! Thomas has traumatized Douglas in the past with showing projections of ghosts in his room at night, and other manner of sick, twisted things. Liam insisted that they will always be in Douglas’ life, but Hope cannot see that happening without being able to maintain her position as his mother. It’s pretty hard to be a mother to a child and not be actively involved in the child’s life, and that is what Liam demanded she give up because it’s just another tie to Thomas. He also demanded she fire Thomas as her designer, just when the fashion showdown is coming up and getting ready to take place! Brooke will agree with Hope to the point of not abandoning Douglas but limiting contact with Thomas. She will probably say that Liam isn’t worth crying over as well, because Brooke will see his ultimatum as a control tactic!