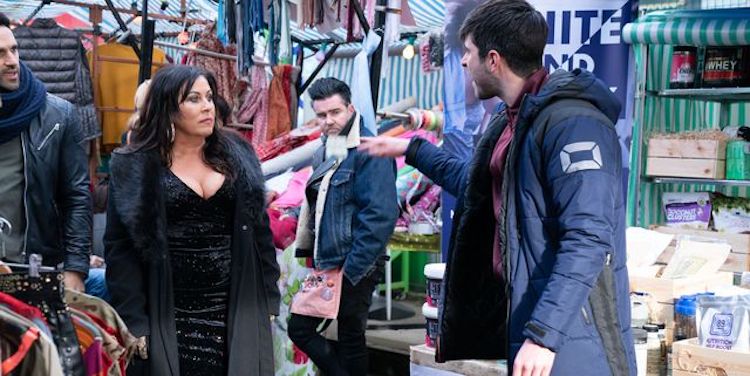 Eastenders spoilers indicate that the evil Leo King has been making Whitney Dean’s life hell, but when Kat stood in for her, a huge fight erupts.

As can be seen from an EastEnders spoiler image, a huge fight is building between Kat Moon (Jessie Wallace) and the nasty Leo King (Tom Wells).

After Whitney Dean (Shona McGarty) found out the truth of Leo King’s identity, she thought he would leave her alone, but she was wrong. King has continued to make it his mission to get closer to Whitney but in the process he has made her life hell while stalking her.

King is currently receiving an unwelcoming response from many of the Walford regulars, including Kat, especially when his stall is placed directly opposite Whitney’s stall in the market. Kat swaps stalls with Whitney in an effort to help her friend and protect her from Leo. However, this only leads to more problems, as Leo keeps interfering and does all he can to try and destroy Kat’s business. After this, Whitney is forced to return to her stall and is once again opposite the evil King in the market.

Even though everyone is against him, King isn’t easily giving up and continues to bother Whitney and the trusty Kat comes to her rescue once again. When Leo starts yelling at Kat, she holds nothing back and a huge row ensues. It looks like King has finally met his match!

Eastenders Spoilers: Kat won’t give up

Kat has shown over and over again that she is never one to give up on a cause, so she will make it very difficult for Leo to continue bothering Whitney when she is around. Will Leo finally give up and leave the market?

There are no more details at this stage, however this is only the start of an exciting week for Leo’s character and it looks like things could fully escalate. These exciting scenes will air on “EastEnders” on Monday, January 27 at 8 pm on BBC One. Keep watching to find out what happens next.