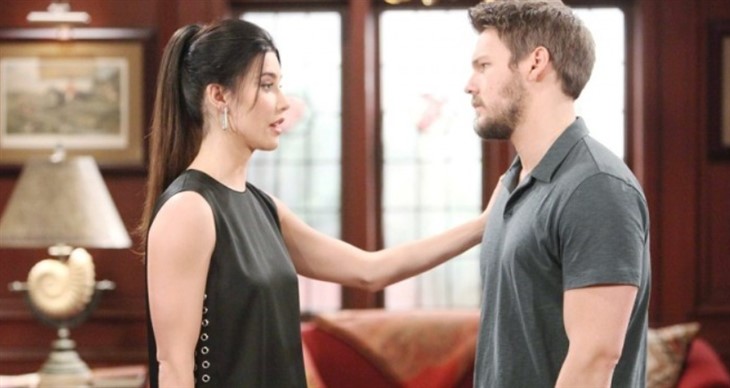 The Bold and the Beautiful spoilers document that Liam Spencer (Scott Clifton) still cares for Steffy Forrester (Jacqueline MacInnes Wood). That’s natural because they’ve been married and have a child.

It also makes sense that Liam’s paternal instincts will kick in when he determines that Steffy’s recovery isn’t going well and that she appears to have an addiction problem. Kelly Spencer’s (Avalon and Colette Gray) welfare is paramount, which is a conviction Steffy shares and is the reason why she initially didn’t want to take pain-killers.

The Bold And The Beautiful Spoilers – Mixing Alcohol With Pain-Killers

It was both shocking and ominous when Steffy got a bottle of beer from her refrigerator and downed her last pill in the living room at the cliff house. Kelly was with Lope at the time. This scene represented a reckless streak that wasn’t open to much subjective interpretation.

Steffy derided herself in choosing to ride her motorcycle, which led to a second motorcycle accident. She had an accident years ago, which caused her to miscarry the first child she and Liam were going to have.

In general contrast to the above situations, choosing to mix alcohol with prescription medication was reckless and reflected a decision driven by intense physical and lingering emotional pain.

Liam has been distracted by the sheer volume of activity in his new normal day. He’s remarried Hope, with both halves of this couple often needing to spend vast amounts of time analyzing their feelings about many topics, due to their shared personality type.

On the upside, Liam and Hope Spencer (Annika Noelle) are open-hearted, as they’ve taken in Douglas Forrester (Henry Samiri). They’ve also welcomed Kelly in the cabin on a regular basis during this time of Steffy’s recovery. Lope’s combined instinct is to help people they care about.

As a result of the above, Liam hasn’t been available to recognize that Steffy has not been herself and is in serious need of help, both physically and psychologically.

The Bold And The Beautiful Spoilers – Steffy Forrester Rapidly Descends

Steffy is used to being the strong one and many people, including Liam, have often praised that positive character trait. But sometimes some people can buy the hype, believing that they are more than who, or what they are.

Wood’s character is a human being, like everyone else. With that full fact, she makes mistakes and isn’t perfect. By choosing to isolate herself Steffy caused and then greased her descent.

Steffy deserves help and will hopefully get it before something tragic happens. Possibly Liam will be one of the people who come through for her in this regard.