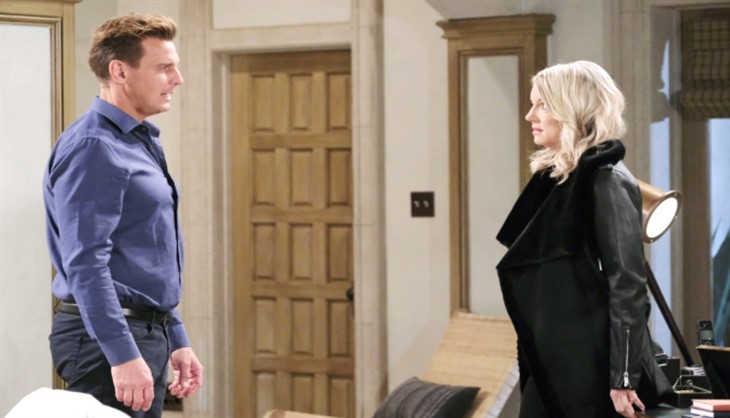 In Monday’s GH, Nina is joyful thinking the information she and Jax got on the half-heart necklace from the jeweler who created it will help her find her long-lost daughter. As viewers will recall, the necklace came with a note from her mother, the late Madeline Reeves, saying that the other piece together with it would mend a broken heart.

Recent episodes have revealed that Madeline had someone else, a Phyllis Caulfield (uncast character) bring an entire heart pendant in to split it in two and make two necklaces of it – Nina remembered the name, and the jeweler gave the receipts to her and Jax.

Nina may be happy that at least her late mother did one thing that was good, but unfortunately, it may be too late for Nina to have a relationship with her long-lost daughter, given that Nelle Benson-Jerome (Chloe Lanier) appeared to be in possession of the other half of the necklace since she was a child, and it has not been revealed whether she is alive, or if she perished in her fall from the cliff-that is if it was really her necklace. Jax winced when Nina got that alert from The Invader which was in essence, a “be on the lookout” for Nelle.

Overall, Madeline was evil – perhaps more evil than her sister, Liesl Obrecht (Kathleen Gati), who was trying to redeem herself when Peter August (Wes Ramsey) framed her for the murder of Drew Cain (Billy Miller) and attempted murders of Dr. Andre Maddox (Anthony Montgomery) for which she is now in The Hague, Netherlands.

Nina will likely tell Jax the whole history – some of which he may already know – how her mother didn’t want her to inherit her money, and how her late ex-husband Silas Clay (Michael Easton) got involved with Ava Jerome, now Ava Jerome-Cassadine (Maura West) with whom he fathered a daughter also, namely the late Kiki Jerome (Hayley Erin).

Silas met a bloody end in Kiki’s apartment she shared at the time with Franco Baldwin (Roger Howarth) who was always a father figure to her, at the hands of Madeline! Nina spent over twenty years in a coma, when Madeline drugged her in hopes of killing the baby she was expecting, also with Silas, to cut off any ties between Nina and Silas, but failed.

When Valentin Cassadine (James Patrick Stuart) and Curtis Ashford (Donnell Turner) did their investigation, Curtis had found a paper trail from a baby broker Madeline paid, and also found a paper trail showing Nina was admitted to the Crichton-Clark clinic, where she spent most of her comatose time, approximately nine months after the baby would have been conceived.

This proved that there was a baby born and Madeline put up for adoption. Nina’s child would be the same age as Kiki, had she lived.