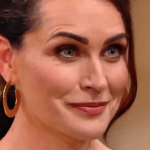 It was recently revealed by Sally that she made up her illness in order to get closer to Wyatt Spencer (Darin Brooks). Sally made a deal with Dr. Escobar that she would get her into Forrester Creations if she would help her fake the illness by giving her a false diagnosis. However, could it be that Sally knew that she would not be able to help Dr. Escobar, or does she think that she can actually help her?

It does seem like Sally believes that she will be able to get away with her scheme in getting Wyatt back. As she does think that she can just fake like she has been cured of her illness and that everyone would just believe her with no questions asked. Even if this was the case, Sally has no pull at Forrester to just be able to get Dr. Escobar a position at the company as she is not a Forrester.

So, it may be silly for Dr. Escobar to think that she should trust Sally to get her a position at the company. It might have been better for her to try her hand at getting into Forrester Creations instead of going along with this scheme. As if her designs are good, then they would speak for themself. Also, when this news comes out about Sally and her part is revealed, her chances of getting into Forrester Creations will become ten times harder for her.

The Bold and the Beautiful Spoilers: Quinn Admits She Masterminded Brooke’s Undoing – How Will Eric React? https://t.co/8BFDa74vII pic.twitter.com/ytBqR6YWtA

It may have been Sally’s intention to help Dr. Escobar, but her intentions will not go as expected as things blow up in her face. No matter what her intentions were, her main priority is protecting herself and getting Wyatt back. We’ll give you updates as other B&B news comes in. Stay tuned to the CBS soap, and don’t forget to check CTS often for the latest Bold and the Beautiful spoilers, updates, and news.