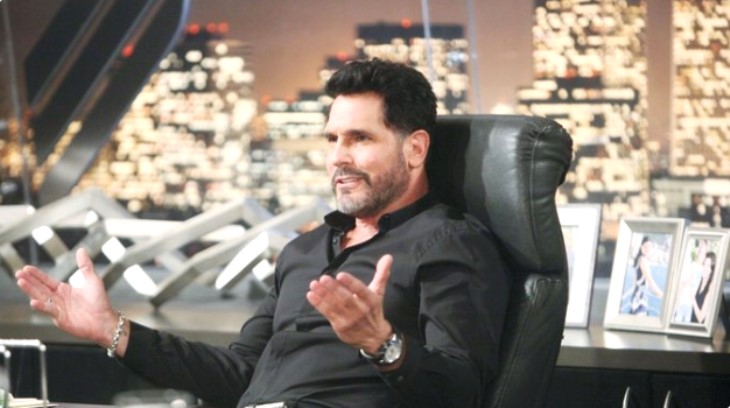 Now, armed with this unexplainable video evidence, Quinn is prepared to pull the trigger. Her plan could potentially end Brooke’s reign in Los Angeles, California. But it also will upend Bill’s life and possibly Quinn’s as well.

The Bold And The Beautiful Spoilers – Shauna Fulton Resists Hypocrisy

Shauna didn’t want to use what she unexpected saw through the cabin door to her advantage. She cares about Ridge Forrester (Thorsten Kaye) and would like to have a life with him. But Shauna realizes that Ridge loves his wife, Brooke.

Shidge represents a brief moment in time. For Shauna it was basically a crush. Ridge appreciated the attention Richards’ character gave him during his period of separation from Brooke. But he chooses to stop the advance of their friendship after realizing that he’d crossed a line on more than one occasion.

Ridge’s tell to Brooke about having kissed Shauna on multiple occasions was overcome. Brooke forgave him, fallout happened during Thomas Forrester’s (Matthew Atkinson) failed wedding ceremony, and Bridge planned to reunite. Following all of that, Shauna doesn’t want to create trouble for Ridge, which is what a decent person would choose to do.

Why would Bill do what he did? There’s no explanation that he’ll be able to offer Katie Logan (Heather Tom) that won’t come across as a lame excuse.

The efforts Bill made to restore his family were enormous. The open-heartedness Katie offered was followed by her frightening ordeal, where she needed a kidney transplant, as provided by Shauna’s daughter, Flo Fulton (Katrina Bowden).

To think that Katie’s sister would allow herself to be drawn into a moment of mutual consent is equally outrageous. Two of the people Katie thought she could trust betrayed her simultaneously. This matter surely won’t be resolved through words either.

The Bold And The Beautiful Spoilers – Quinn Forrester Jeopardizes Her Marriage

Eric was fully clear. It was just weeks ago that he told Quinn to stop jabbing Brooke.

McCook’s character has a special place in his heart for his former wife, as Quinn knows and detests. That spurred her to ignore Eric’s request by spiking Brooke’s juice bottle with alcohol and by pushing the Brill kiss into the collective consciousness during what was intended as a Bridge reunion party.

Queric will be jeopardized, if not more, as a result of Quinn’s actions. She’ll only have herself to blame as trouble erupts on B&B.