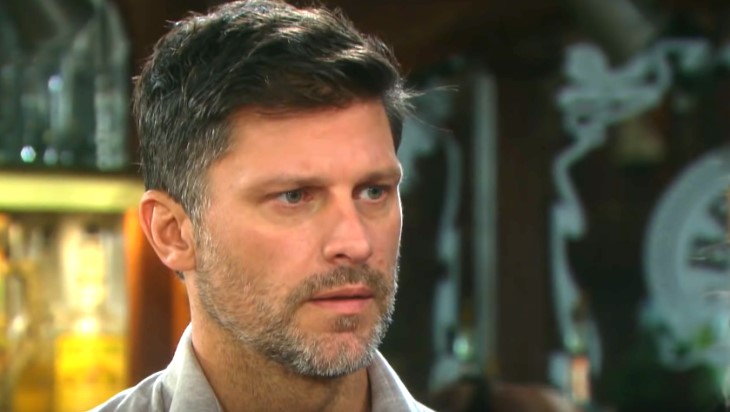 Days of Our Lives spoilers reveal Eric Brady (Greg Vaughan) will struggle with the truth. This indicates that he finally discovers that he isn’t Mackenzie “Mickey” Horton’s (the May twins) real father. Meanwhile, Xander Cook Kiriakis (Paul Telfer) has a disturbing dream about the woman he loves, Sarah Horton (Linsey Godfrey). Could the guilt finally be getting to Salem’s bad boy?

DOOL spoilers reveal that Nicole Walker (Arianne Zucker) continues trying to find out the truth regarding the true identity of Mickey’s mother and father. She knows in her heart that Eric and Sarah are not the child’s biological parents. However, she doesn’t want to say anything, especially to Eric until she can prove her theory.

However, Eric is already getting suspicious. After all, he caught her asking a lab tech about test results. Nicole had to do some quick thinking to cover up the real story of what she was doing.

It is teased that in the next two weeks, Eric will struggle with the truth. Now, this could be regarding almost anything, but it seems to imply that he finally learns about Mickey’s parents. It will be heartbreaking for him, but will he blame Nicole for it? After all, it was because of her confession that he found out his fling with Sarah resulted in a child. Now that child is being suddenly ripped away from him?

Days of Our Lives spoilers reveal Xander will end up having a disturbing dream about the woman he loves. The two finally are getting married and are close to setting a date. However, could something come up that will derail their plans? It seems that if Eric struggles with the truth, then that would be a big yes. Perhaps his subconscious is telling him to confess the truth before it’s too late?

Days of Our Lives Spoilers: Can Kayla And Steve Find Their Way Back To Each Other? https://t.co/vRzCmXWvKS pic.twitter.com/newvHcn6ni

It is suggested that Xander might end up figuring out that if he doesn’t tell the truth to Sarah, then Nicole will. That would be the worst thing to happen and would guarantee him losing Sarah forever. Perhaps the dream shows him how she would lose the woman he loves if he doesn’t’ come forward with his devious deed?

It would be a shocking move for his character, but Sarah has turned him into a better man. Maybe this can be the start of him finally doing the right thing, even if it is nearly a year late.