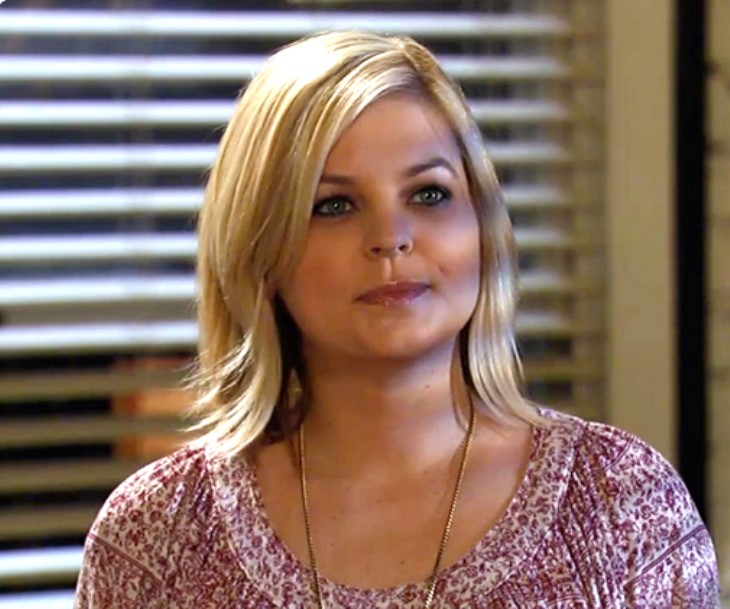 General Hospital (GH) spoilers suggest that Crimson Magazine run by Nina Reeves (Cynthia Watros) may soon go down in flames! GH viewers may agree that with the recent departure of Nina’s right-hand woman, Maxie Jones (Kirsten Storms) Crimson is in a world of hurt.

GH fans of Maxie Jones have probably been rooting for her to make some life-changing decisions over the course of recent months. That’s because as Maxie herself has often complained, she’s found herself covering for Nina every time her boss experiences an emotional breakdown over a failed relationship. Moreover, Maxie hates it that she’s treated like a servant at worst, or an executive assistant at best, when she’s actually Crimson’s Creative Director.

It wasn’t any wonder then, that after pushing for a promotion and a raise (and being promised both) Maxie was outraged to learn that she wouldn’t be getting what she deserved. With her hurt feelings front and center in her mind, Maxie wrote a resignation letter and immediately tried to take Lucy Coe (Lynn Herring) upon a job offer at Deception Cosmetics.

Although GH viewers may applaud Nina for trying her best to keep Maxie from leaving Crimson, others will say that she didn’t try hard enough. Even though money couldn’t be shuffled around, many GH fans have suggested that since Nina was the recipient of a huge inheritance, she could have floated the difference between Maxie’s current and desired salaries at least until the budget for the new year became available. Of course, Nina hasn’t done anything like that and hasn’t suggested such a solution to Maxie either.

Now, with Maxie’s departure, Nina is going to have to work hard to run Crimson by herself. Now, it’s more than likely that Nina will panic and try to hire someone else to take Maxie’s place. However, Nina has been comfortable to Maxie’s amazing job performance and has become accustomed to having things accomplished without having to oversee any of it.

That’s probably going to change right away. Whomever Nina tries to get to fill Maxie’s shoes is definitely going to need some time to adjust to his or her new responsibilities. Even if that person is uber competent, Nina will likely find something to dislike about that individual’s performance.
Why?

The answer, of course, is that the new Creative Director just isn’t Maxie Jones!

GH fans may see Nina over the course of the next weeks, perhaps months, exploring ways to get Maxie back. The real problem is that now Maxie has the promotion as well as the wage increase she wanted from Crimson … over at her new job at Deception. Moreover, Maxie feels like her new boss respects her and the contribution that she is able to bring to the table.

Nina may find competing with Deception’s hold on Maxie to be a losing battle at this point. It remains to be seen, however, if Nina and Maxie can bridge their differences and remain friends … even if they may never work together again.