The Bold and the Beautiful spoilers reveal Wyatt Spencer (Darin Brooks) made his choice. Although he sees his future with Flo Fulton (Katrina Bowden), he hasn’t stopped caring about Sally Spectra (Courtney Hope). Now that he knows the truth about her medical condition, he is determined not to let Sally suffer alone. Brooks recently discussed the storyline and hinted at what fans could expect.

The Bold and the Beautiful Spoilers – Choosing Flo Fulton

B&B spoilers confirm that Wyatt finally made his final choice in the love triangle. His conflicted heart made it difficult for him to decide which woman he wanted to spend the rest of his life with. He knew that it wasn’t fair to anyone for him to keep bouncing between Sally and Flo. After months of him remaining silent about his romantic struggle, Wyatt ended up picking Flo. 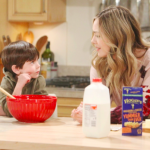 Right after Wyatt made his choice and broke Sally’s heart yet again, he would learn some devastating news. Sally was silently suffering from a medical diagnosis that has not been named but will cut Sally’s life short. In fact, she only has one month to live.

In the latest issue of CBS Soaps In Depth, Brooks talked about what is going through Wyatt’s mind as he tries to grasp that Sally has been given a death sentence.

“Wyatt is a sensitive guy. He wants to be with Flo, but he loves Sally, too. This has kind of thrown him for a loop.”

The Bold and the Beautiful spoilers suggest Wyatt will insist on being there for Sally. Previously, she has made it clear that Wyatt’s presence isn’t necessary and at times, not wanted. He literally just broke her heart for the second time and her wounds are still fresh.

Wyatt still cares about Sally and wants to be her support system. She doesn’t want her going through something like this alone.

It is speculated that Wyatt might make a drastic decision in order to do what he feels is right. The one thing Sally has always wanted is to find true love and to be with that person forever. She thought it was Wyatt and is crushed she won’t be walking down the aisle with him. Could he make a dying woman’s wish come true? That is what some viewers think, but we’ll have to see what happens.

Be sure to catch up on everything happening with B&B right now. Come back here often for The Bold and the Beautiful news, updates and rumors!