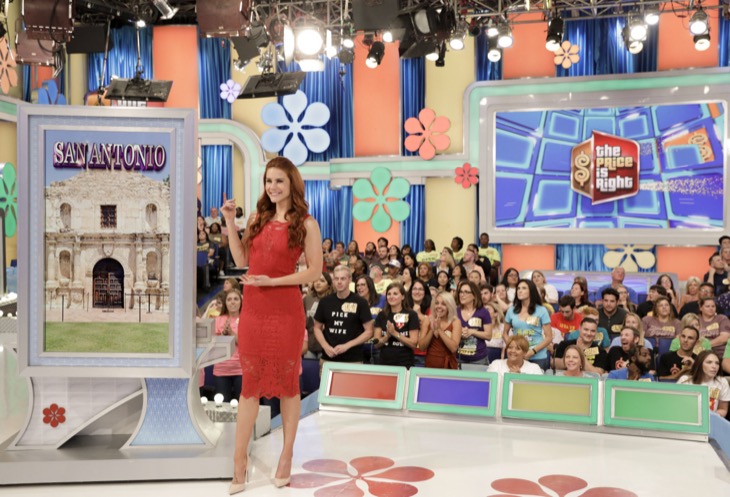 CBS The Bold and the Beautiful spoilers and updates document that Courtney Hope’s (Sally Spectra) second appearance this week as a guest model on an episode of The Price Is Right sparked a social media reunion with B&B co-stars, Katrina Bowden (Flo Fulton) and Annika Noelle (Hope Logan).

The Bold And The Beautiful Spoilers – Quarantine Dialogue Offered

Aside from the photo of an elliptical machine, which was one of the prizes on the show that’s hosted by Drew Carey, Hope said, “But for real… I’d love one of these right now! Getting tired of all my quarantine workouts!”, followed by a winking, tongue out, emoji, and a pair of hands emoji.

Bowden posted a reply saying, “Time to order a skip it.”.

Hope replied, saying, “hahah yeah I thought about it. I loved skipits as a kid! It’s that or a trampoline!”, including laughing and crying face emoji.

Hope replied with a heart emoji and then saying, “miss you!”.

Noelle concluded, “girrllll – it’s been too long.”, followed by a heart emoji.

The real-life digital dialogue represents what the actors can give to B&B fans during the production shutdown that’s been caused by the response to the COVID-19 virus pandemic.

Catch me on @therealpriceisright today 👏🏼✨! Always such a blast!! @dgoda85

Hope has one hundred and thirteen thousand Instagram followers. That six-figure audience allows her to remain in touch with her fans. She’s an active poster, with her photo becoming post number 2,417.

Social media is particularly important during this very unusual time because no new episodes of B&B are available. Theme week shows have included Sally, on occasion, but have mostly focused on other main characters and historical flashback episodes.

Hope was first seen on B&B in 2017. She is the namesake of her famous aunt, Sally Spectra I (Darlene Conley), and the granddaughter of Shirley Spectra (Patrika Darbo), who was Sally I’s sister.

Sally II’s write-in to the show involved a scheme where Forrester Creations fashion designs were presented as Spectra Fashions. In time she appeared to have changed her ways. But, as viewers have seen this spring, the Spectra aura has gone negative again.

Hope’s character, who was originally involved with Thomas Forrester (as then played by Pierson Fode), proclaimed earlier this year that she had a terminal condition and was soon to die. Sally’s desperate lie was part of an effort to revive a relationship with Wyatt Spencer (Darin Brooks).

Sally’s friend, Dr. Penny Escobar (Monica Ruiz), who provided the faux diagnosis in return for Sally’s promise of FC introductions, knocked Flo unconscious. That happened after Flo forced the truth out of Sally.

The Bold And The Beautiful Spoilers: Flo Breaks Up With Wyatt After Sally Reveal – She’s Had It With His Trust Issues! https://t.co/DxHP75cs9y pic.twitter.com/eECgf8k9z0

B&B’s ending scene, in the last new episode that was shown, had Sally and Penny carrying Flo out of Wyatt’s living room as he was entering. His reaction shot and words continue to leave viewers hanging.