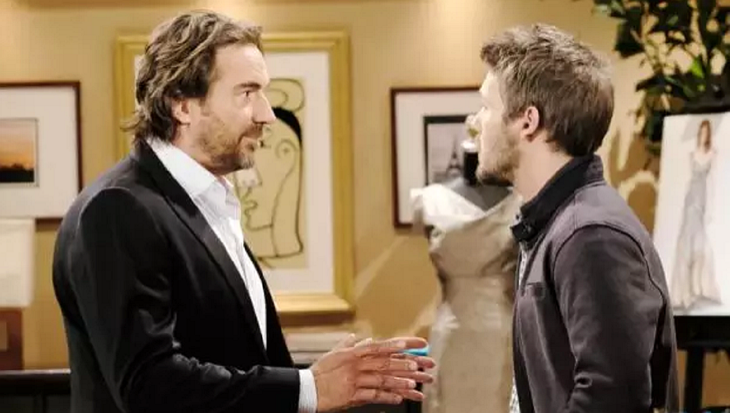 CBS The Bold and the Beautiful spoilers and updates reveal that Thorsten Kaye (Ridge Forrester) recently reflected on his character’s complex love life and what it’ll look like moving forward. B&B fans know Ridge was crushed and furious over Brooke Forrester’s (Katherine Kelly Lang) latest betrayal. Ridge insisted he was done and took off to Vegas with Shauna Fulton (Denise Richards), which brought some wild and free moments.

In an interview with Soap Opera Digest, Kaye talked about the difference between Ridge’s love for Brook and his new feelings for Shauna. “Well, the whole thing with Shauna…is she is a breath of fresh air,” Kaye admitted. He talked about what becomes important in a relationship as you get older. Kaye noted that you really have to ask yourself if you’re better together than you are alone.

“I think maybe Ridge has finally seen that his life with Brooke couldn’t be that – and maybe he’s looking at Shauna thinking, ‘This could be a whole, new fresh start,’” The Bold and the Beautiful star said. Although Kaye doesn’t know where the story’s headed next, there are certainly some intriguing possibilities to explore.

Brooke dragged Ridge back to Los Angeles after his drunken, crazy night in Sin City. However, that doesn’t mean Ridge can just get over Brooke’s kiss with Bill Spencer (Don Diamont). It doesn’t mean he can immediately put Shauna out of his mind either!

Now that Flo Fulton (Katrina Bowden) has been injured, she could be held hostage or at least battle some amnesia. Flo’s going to need her mom, so Shauna’s return to LA is bound to complicate things for Ridge. He’s clearly drawn to Shauna, which could spell trouble for Brooke’s reunion plans.

As for Kaye, he also touched on Thomas Forrester’s (Matthew Atkinson) betrayal and hinted that Ridge has been hypocritical at times. Kaye brought up Liam Spencer’s (Scott Clifton) treatment of Steffy Forrester (Jacqueline MacInnes Wood), which sounded an awful lot like the way Ridge behaved after Brooke’s betrayal!

“With the whole Thomas thing, Ridge was not always the biggest Liam fan because of what he did to Steffy for years,” Kaye said. “I know Steffy had her share of screwups, but as a father, Ridge thinks Liam should’ve tried to find a way to work through it instead of just walking away, which again, now, is kind of ironic.”

It’s interesting to hear Thorsten Kaye’s perspective as we look forward to new episodes eventually. Do you think Ridge should be with Brooke or Shauna? Is there a better option out there instead?