On “The Bold and the Beautiful,” Liam Spencer (Scott Clifton) has been bouncing from to and fro between Steffy Forrester (Jacqueline MacInnes Wood) and Hope Logan (Annika Noelle). Some fans say he’s better off with Steffy while others say he should be with Hope.

The actor behind the character has finally weighed in on the topic. Clifton was recently asked on Twitter who should Liam be with. His reply was brief and funny. 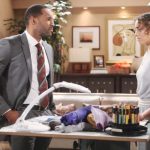 “His hand, some lotion, and a box of tissues. For at least a year,” Clifton tweeted. This man does have a good sense of humor. Viewers will just have to wait and see who his character will finally end up with.

It’s going to be an intense Wednesday for all the viewers of “The Bold and The Beautiful.” Thomas believes that everything is going according to his plans. But what he doesn’t know is that Liam Spencer (Scott Clifton) and Hope Logan (Annika Noelle) are about to take him down once and for all.

Thomas and Zoe Buckingham’s (Kiara Barnes) wedding day has finally arrived. The latter wears the wedding gown designed by his spouse to be and the Forrester mansion looks perfect for the special occasion.

Hope and Liam will have a plan set in place once they arrive at the Forrester mansion. The pair, along with Steffy, came up with a plan to make Thomas pay for everything he’s done and the lives he’s ruined. They’ll make him believe that he’s about to get what he wants at first, and then they’ll crush him.

Viewers know that Thomas has urged Douglas Forrester (Henry Joseph Samiri) to convince Hope to marry him. During the ceremony, the poor little kid will break down at the thought of Zoe replacing Hope. He’ll walk out with Hope in tow.

Zoe asks Thomas to continue the wedding but everyone will be shocked when they see Hope donning a white bridal gown as she returns to the ceremony. Thomas will think that he’s finally getting Hope to marry him. What he doesn’t know is that something else is about to happen. Stay tuned to the CBS soap, and don’t forget to check SOS often for the latest Bold and the Beautiful spoilers, updates, and news.