The Bold and the Beautiful Spoilers Tuesday, March 10: Bill & Brooke Agree To Keep Their Kiss A Secret – Liam, Hope, & Steffy Plot To Bring Thomas Down 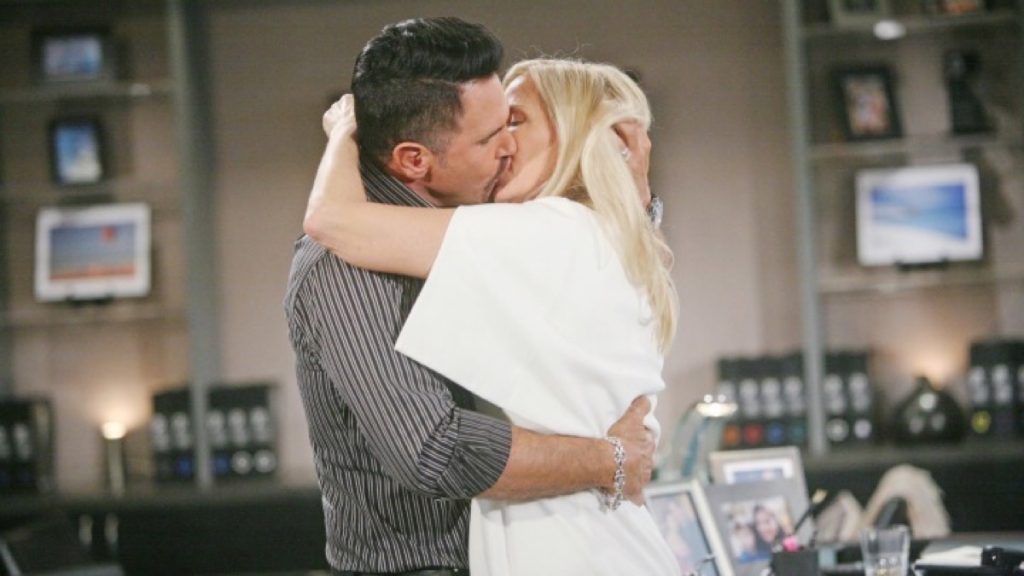 The Bold and the Beautiful spoilers for Tuesday, March 10, tease that Brooke Forrester (Katherine Kelly Lang) and Bill Spencer (Don Diamont) will find themselves in a dilemma. As B&B viewers know, they’re currently alone in Hope Logan’s (Annika Noelle) cabin and have just shared a passionate kiss. This came after Bill vowed to always care about Brooke and protect her and Hope from Thomas Forrester (Matthew Atkinson).

Of course, once the kiss is over, they’ll have to have a talk about what it all means and what they’re going to do about it going forward. It looks like neither Bill nor Brooke will want the kiss to come between their respective relationships with Katie Logan (Heather Tom) or Ridge Forrester (Thorsten Kaye), so they’ll most likely decide to keep what happened between them.

However, it doesn’t look like things will be so simple. As B&B viewers know, someone was outside the cabin looking in during their smooch session. But who was it? Given that Thomas was shown elsewhere during this time on the show, it doesn’t look like it was him. Could it have been Quinn Forrester (Rena Sofer)? She might have been following Bill for some reason, perhaps to talk to him about Wyatt Spencer (Darin Brooks).

Quinn would certainly be interested to know that Brooke was busy kissing someone else, given that she’s trying to save her marriage to Ridge. As B&B viewers know, Quinn recently vowed to bring Brooke down, and this could be the very thing that could do it. Quinn could definitely destroy “Bridge’s” already weakened marriage with this tidbit of information!

At any rate, it doesn’t seem like Brooke and Bill will be able to keep this kiss a secret for long. And when the secret does get out, it’s going to cause a world of problems for both of them. It could be the final nail in the coffin when it comes to Brooke and Ridge’s marriage, and it could very well destroy Bill and Katie’s relationship, too.

B&B Spoilers – Thomas Forrester Is About To Get His Comeuppance

Next, on Tuesday’s new episode of B&B, a devious plot will form, but this time it won’t be Thomas who’s behind the whole thing. Rather, Hope, Liam Spencer (Scott Clifton), and Steffy Forrester (Jacqueline MacInnes Wood) will put their heads together to find a way to bring Thomas down.

As B&B viewers know, Hope and Liam just got engaged, but it looks like they’ll put their happy plans on hold for a little while to focus on finding a way to give Thomas what he deserves. Exactly what they’ll plan remains to be seen, and it’s actually unclear whether the B&B viewing audience will hear all the details of their plan in advance. But they will hatch some plan, and it’s going to be a good one.

The Bold and the Beautiful Spoilers – What Will Hope Logan Plan For Thomas Forrester’s Wedding?

According to the Bold and the Beautiful spoilers, something pretty spectacular is going happen at Thomas’ wedding to Zoe Buckingham (Kiara Barnes). Douglas Forrester (Henry Joseph Samiri), after being coached by Thomas, will have a meltdown during the ceremony and will run upstairs.

It looks like Hope will follow Douglas, just according to Thomas’ plan. He’s hoping that Douglas will implore Hope to make the wedding stop and to marry his dad instead. That’s Thomas’ big fantasy…that Hope interrupts the wedding and asks Thomas to marry her rather than marrying Zoe.

We’ll see what happens here, but it looks like Hope will return to the wedding after comforting Douglas, and when she does, B&B spoilers say that she’ll stun the wedding party. Could she return wearing the wedding gown that Thomas designed as the showstopper for Hope For The Future? That would be exactly what Thomas wants.

From there, Hope could essentially force Thomas to admit that he still wants her, and once he dumps Zoe at the altar, Hope could say that his plan has been exposed and has failed. It would be a big way for Thomas to go down. We’ll see what happens here, but B&B spoilers point to something big happening at the wedding. Do you think that Hope and Liam will plan to expose Thomas in this way?