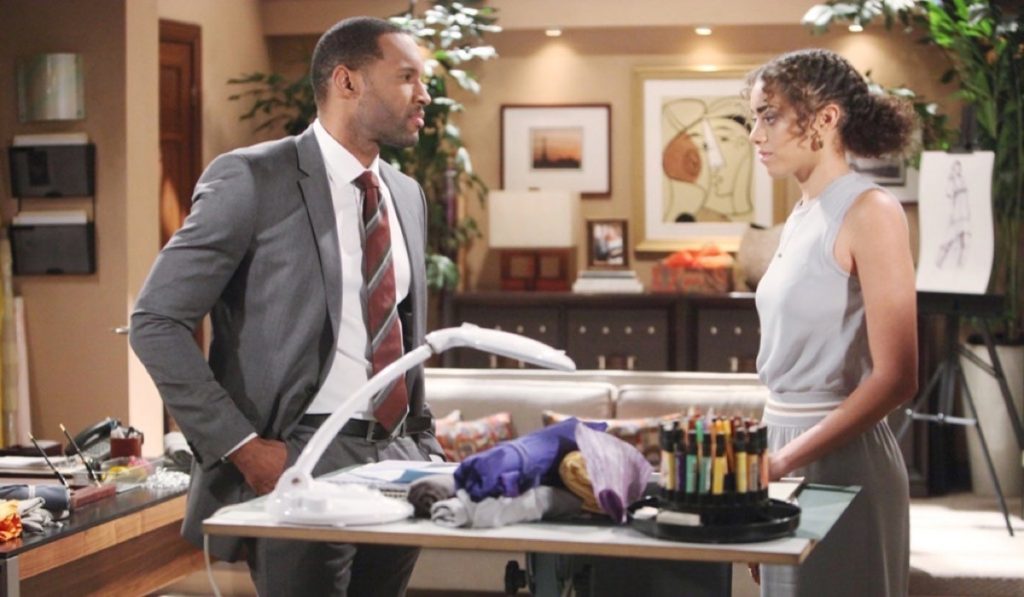 Viewers of The Bold and The Beautiful will recall that Carter has tried to warn Zoe before, at least twice, that she could wind up hurt. Carter, along with Steffy Forrester, (Jacqueline Macinnes Wood) Liam Spencer, (Scott Clifton) and Brooke Logan Forrester (Katherine Kelly Lang) can see right through Thomas Forrester (Matthew Atkinson), but Zoe has been swept off her feet and is no longer objective.

When she was first brought back into Forrester Creations and given another chance, after having been involved in the baby Beth Spencer (Madeline Valdez) scandal, she was supposed to spy on Thomas around Hope Logan (Annika Noelle) and report back to Liam and Steffy to protect Hope from Thomas.

That mission was soon forgotten as Thomas masterfully manipulated Zoe into a fairy tale romance that everyone around Zoe except for Zoe herself can see is only a fairy tale! Carter has been terribly hurt and unlucky in love himself and doesn’t want to see a beautiful and sweet woman like Zoe be devastated.

Carter is single, available, and paying Zoe a lot of attention lately with his watching over the Thomas and Zoe situation from the background and giving her warnings. Carter is one of those people that usually stay in the background and observes, and though he usually minds his own business, when he sees someone heading for heartache or trouble – usually a beautiful female someone – he takes action and tries to warn her!

Carter is Forrester Creations’ patent attorney and has always been friendly with the beautiful Zoe, and he also officiates at weddings. Judging from photo stills of the scene, it looks like Thomas is planning to have Carter officiate at his and Zoe’s wedding.

The Bold and the Beautiful Spoilers – Carter Walton Has Not Been Involved With Anyone For A Long, Long time

Carter has not been in a relationship in a long, long, time, and longtime viewers will recall that the last time he was involved with Maya Avant (Karla Mosley). Maya dumped him for Rick Forrester (Jacob Young), and then he found out she was transgender from her sister, Nicole Avant (Reign Edwards) and then was conflicted as to whether he should tell Rick or not! Carter blurted out to Ridge Forrester (Thorsten Kaye) about Maya being transgender, and Ridge was shocked and actually felt bad for Little Ricky.

Ridge then told Eric Forrester (John McCook) and Brooke who Maya really was, and Brooke appointed herself the one to tell Rick. Brooke confronted Maya about her and Rick’s honesty and her not being who she really is. Brooke called her Myron and stated she knew, and to make a long story short, Maya left town when Rick couldn’t accept her the way she was.

It is Carter’s compassion and empathy for people being hurt that spurs him once again to try and rescue a beautiful woman who is heading for heartache. Could Carter have an ulterior motive, and possibly be waiting in the wings to catch Zoe and her broken heart?

The Young and the Restless Spoilers: Tessa Playing Hardball – Refuses To Forgive Mariah