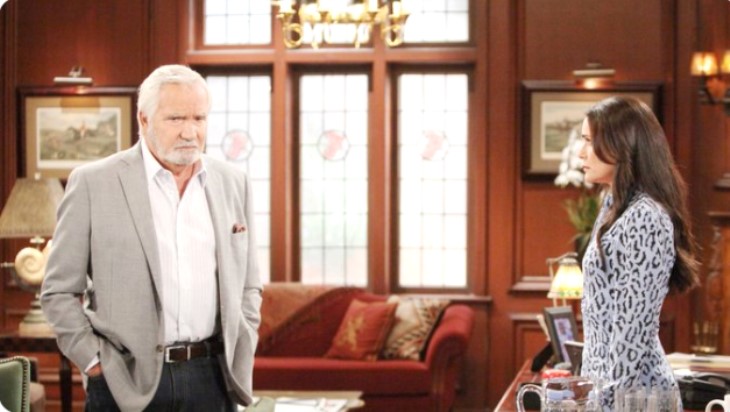 Viewers of The Bold and The Beautiful will recall a few weeks back when Quinn and Brooke actually got into a physical fight in the living room of the Forrester mansion when Quinn was insulted over Brooke’s insults to Shauna Fulton, (Denise Richards) and Brooke’s slapping Shauna in the face!

As viewers of The Bold and The Beautiful know, Shauna and Quinn are besties going back to when their children were small and growing up together! When Brooke gave Shauna that slap in the face, Quinn retaliated by giving Brooke a right hook that nearly knocked her to the ground, and as the women’s’ argument escalated and became louder, it got the attention of Eric, who came down and stopped it, and moreover, when he found out that Shauna had been spending time with Ridge, who was living in the guesthouse at the time, he evicted Shauna!

He wasn’t going to have continual catfights in his house, and he gave Quinn some stern instructions after Shauna and Brooke left the mansion that day! However, from that day on Quinn had declared war on Brooke and was determined to get rid of her by any means possible!

Longtime viewers of The Bold and The Beautiful will recall that Eric and Brooke were married a long, long time ago in 1990-1993. They married again in 2005 but that only lasted one year, to 2006. She’s been married seven times, as far as having had seven husbands. She was married to some of them only short periods of time, and has been married to Ridge the most times, a total of eight different times in approximately twenty-four years!

The Bold and the Beautiful Spoilers: Katherine Kelly Lang Opens Up About Brooke and Bill’s Fatal Kiss https://t.co/ycMMXjC6oI pic.twitter.com/k4JrHf1Z4J

Eric still has a soft spot for her even though their marriages didn’t last very long, either, and this fact absolutely galls Quinn! The rivalry has been there for years, and it will not likely ever end. But Eric was very concerned as to where that video came from and if it was an old one or if it was a new one. Quinn made it a point to mention the baby monitor that could be seen in the room, proving that the video was current and not from years ago when Bill and Brooke were together.

Besides, that many years ago there was no such thing as digital photography and the footage would have had to have been altered to be compatible with a digital photo frame! Eric saw both his son Ridge and his ex-wife and more recently daughter in law Brooke’s hearts shatter before his eyes, after trying so hard to overcome their differences over Thomas Forrester (Matthew Atkinson) and Ridge’s eyes having been opened to what his son really is, and now this!

If Eric finds out that Quinn was responsible for the video being put on the frame solely to embarrass Brooke and break up her and Ridge, it may well be the last straw for Eric and he might dump Quinn!