The Bold and the Beautiful promo for the week of March 30th thru April 3rd indicates that Ridge Forrester (Thorsten Kaye) will leave Brooke Logan (Katherine Kelly Lang), and try to reunite with Shauna Fulton (Denise Richards).

The Bold and the Beautiful Spoilers – Fallout From The Video 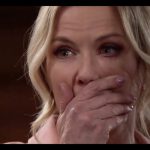 Brooke tried to keep her kiss with Bill Spencer (Don Diamont) a secret. However, Shauna secretly recorded them when they were in the cabin.

Shauna thought about using the video against Brooke but changed her mind because she didn’t want to hurt Ridge.

However, Quinn Fuller (Rena Sofer) got hold of the video before Shauna deleted it.

Quinn then used to finally get her revenge on Brooke. By exposing Brooke and Bill’s kiss, Quinn has destroyed her nemesis.

When Ridge saw the video of Brooke and Bill’s kiss, he was furious and lashed out at both of them. Brooke tried to explain her reasoning for kissing Bill, but Ridge refused to listen.

For years, he’s had to deal with Brooke’s antics when it comes to other men. Her kiss with Bill has altered their relationship. He thought he could trust her, but now he realizes she’s not going to change.

After her latest betrayal, he’s decided they’re over. As Ridge is leaving the house, he tells Brooke not to follow him. When he walks out the door, Brooke breaks down as she calls after him.

Despite having the chance to break up Brooke and Ridge’s marriage, Shauna refuses to do it.

Yet, she still voiced her concerns about Ridge. During a talk with Flo Fulton (Katrina Bowden), Shauna says that Ridge is married to a woman who can’t remain faithful.

Shauna is upset about the way Brooke is treating Ridge but has decided to keep her nose out of their business.

Knowing that odds are she’ll never be with Ridge, Shauna makes the decision to go back to Las Vegas.

After Brooke betrayed him by kissing Bill, Ridge has decided to end his marriage.

This now leaves the door open for him and Shauna to be together.

Quinn wants nothing more than for her friend to be happy, and she knows how much Shauna loves Ridge.

She already succeeded in the first step of her plan by breaking up Ridge and Brooke’s marriage. Now, she’s got to reunite Ridge and Shauna.

With Shauna about to leave town, Quinn convinces Ridge to go after her.

Ridge goes to see Shauna and explains that he and Brooke are over. He also professes his love to Shauna and how he can’t live without her.

Yet, Shauna isn’t too quick to jump in his arms. While Shauna would love to be with him, she knows now’s not the right time.

Shauna feels like she’s a rebound and tells Ridge she’s not going to be used just so he can get over Brooke.

So does this mean that Ridge and Shauna are a no go? Or can he convince her that she’s the woman for him?