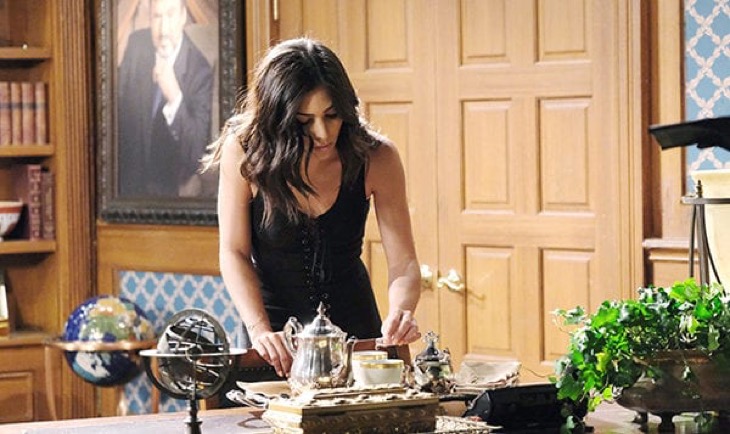 Days of Our Lives updates and spoilers reveal that the week of May 18 will have a lot of unexpected reactions and surprising scenes. It is teased that Jake Lambert (Brandon Barash) gets attacked, but not by the thugs that assaulted Ben Weston (Robert Scott Wilson). Instead, it is Gabi Hernandez DiMera (Camila Banus) that goes crazy on the Stefan DiMera lookalike. Will she face consequences?

DOOL spoilers reveal that Gabi is not going to give up until she gets answers about Jake. The only problem is that Jake keeps insisting that he isn’t Gabi’s dead husband. No matter what he does or says, Gabi will not accept this. She won’t stop until she proves her theory.

According to Days of Our Lives Past, Present, and Future, Gabi will attack Jake during the week of May 18. It is most likely because he refuses her “help.” She desperately tries to convince him that he is really Stefan. Even though Gabi is quite persistent, Jake will try to get rid of her. When all else fails, Gabi apparently assaults the mysterious mechanic.

Days of Our Lives spoilers reveal that Gabi is used to getting away with everything. No matter what she does, Gabi figures out a way to remain out of prison. However, Jake is not a typical Salemite. After Gabi attacks him, he files a police report. He insists that the Salem Police Department do something about his stalker.

Days of Our Lives Spoiler: Arrested For Assault

It is confirmed that Lani will have the great pleasure of arresting Gabi. She might have gotten away with the exploding pacemaker and driving Lani out of town. She might have gotten away with drugging Abigail DiMera (Kate Mansi). However, Lani is thrilled that she can finally put handcuffs on Gabi for something. But can they make the charges stick or will she walk away from any penalties?

What excuse will Gabi come up with for attacking Jake? Will she deny it or admit to manhandling the mechanic? Will she just get away with yet another crime or could she actually face criminal consequences? We will have to keep watching the NBC soap opera to find out.

General Hospital Spoilers: Valentin Turns To The Good Side For Charlotte – Impressed Nina Decides To Take Him Back?