Days of Our Lives Spoilers: Gabi Gets Inside Jake’s Head, Mechanic Questions His Own Identity 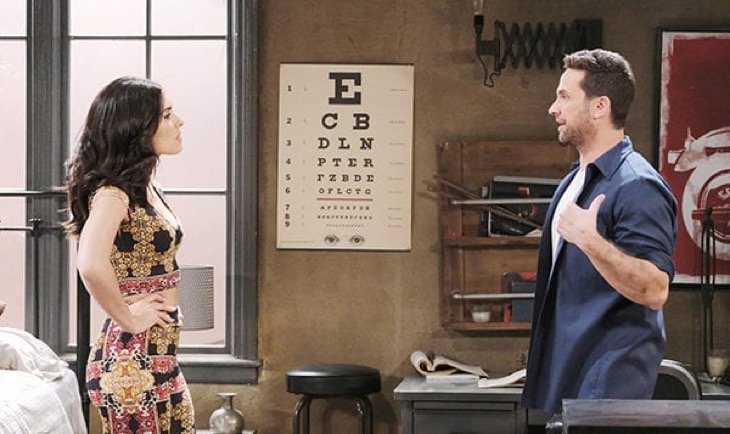 NBC Days of Our Lives updates and spoilers reveal that Gabi Hernandez DiMera (Camila Banus) is determined to figure out the truth about Jake Lambert (Brandon Barash). During the week of May 11, she will interrogate Dr. Wilhelm Rolf (William Utay). She also keeps pushing Jake to believe he’s Stefan DiMera. The actor teased that she begins to make Jake question his own identity.

DOOL spoilers reveal that Gabi is convinced that Jake is really Stefan. Prior to Barash’s return, the actor told Soap Opera Digest that Gabi will be “very persistent” in trying to convince Jake of her theory. So far, the mechanic just thinks she is nuts and even asked if she was taking any medication. However, Gabi could soon get into Jake’s head.

It is teased in the latest issue of SOD that Kate Roberts (Lauren Koslow) will be awestruck when she sees Jake. After she gets over the initial shock of his resemblance to Stefan, she will share some information with the mechanic. She will talk about the man that Stefan was, his characteristics, and his way of dealing with issues.

Days of Our Lives spoilers imply that Jake isn’t just curious. He is in deep trouble with some bad people. If he can truly be passed off as Stefan, then could that be his way out? Could he play a game with Gabi and pretend to “remember” that he is Stefan in order to get out of trouble? That seems to be the way that this storyline is playing out.

Days of Our Lives Spoilers: Jake Lambert Questions His Own Identity

In an interview with Soaps.com, Barash teased that Gabi might get into Jake’s head. It is suggested that the Latina fashionista could end up questioning his own identity and memories.

“It will be revealed who he is. What I will say is my first month or two back on the canvas is a lot of… Is he or isn’t he [Stefan]? You may start to see Jake grapple with that a bit, too. It’s a fun journey that they wrote and hats off to them for the way they did it.”

What do you think of what Barash had to say about the mystery surrounding Jake? Do you believe that he is Stefan or is the truth a bit more complicated and unexpected? To find out, we will have to keep watching the NBC soap opera.