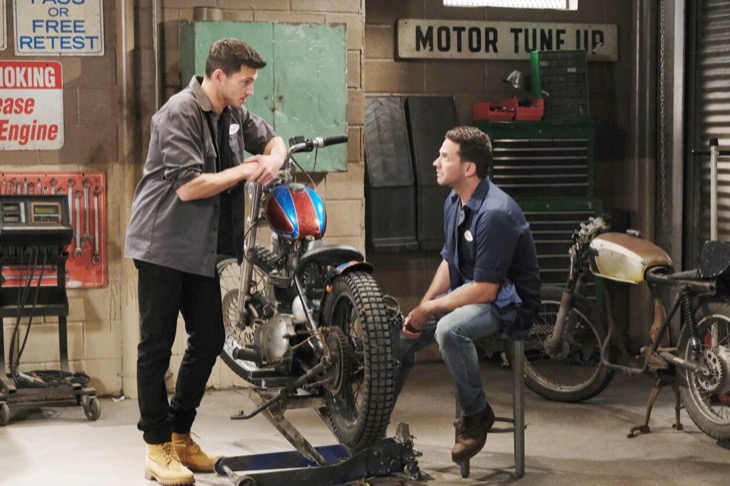 NBC Days of Our Lives updates and spoilers reveal that Ben Weston (Robert Scott Wilson) was beaten up pretty badly by thugs that were after Jake Lambert (Brandon Barash). Don’t expect that to be the only time the mechanic’s past will affect the reformed serial killer. Wilson teased during an interview that his future will be in danger. Will Jake finally explain what’s going on and who’s after him?

Days Of Our Lives Spoilers – Jake Lambert’s Past

DOOL spoilers reveal that Jake his hiding something about his past. There are thugs that were sent to the garage to send a strong message. Instead of delivering it to Jake, the goons ended up beating Ben with a crowbar. Understandably, Ben, and Ciara (Victoria Konefal) want answers, but they aren’t getting any.

Jake doesn’t want anyone knowing why there were two men sent to attack him. After Ben was assaulted, he informed Jake that he didn’t tell Detective Eli Grant (Lamon Archey) everything. This was an opening to allow Jake to feel comfortable enough to tell Ben and Ciara his big secret. However, he still wouldn’t explain what kind of trouble he has gotten himself into.

Days of our Lives spoilers reveal that Ben proposing to Ciara will start a new chapter in the reformed serial killer’s life. She has remained by his side no matter what. His prison ordeal is over. He is focused on a new career and building a life with the woman he loves. But being attacked and not knowing why could put a dent in his plans.

Speaking to TV Insider, Wilson hinted that this attack might not be the only one for Ben. It seems that working for Jake might continue to put the Salemite in danger. The actor teased that he also could get in deeper than he should. Even though Jake is not Stefan DiMera, he is putting himself on the line as if he were.

“He’ll never be squeaky-clean. That’s just not who he is, even though he has a good heart and he’s on the right path.”

Her Majesty Had To Endure Life-Changing Event With Solemnity https://t.co/AOt757qWPl pic.twitter.com/qbRPyqlmNi

What do you think is Jake’s secret and will the thugs return? Could get involved with the mysterious mechanic end in devastating consequences for Ben? We will have to keep watching the NBC soap opera to see how this storyline develops.

Days Of Our Lives Spoilers: What’s Gwen’s Connection To Rolf? Why Is She…