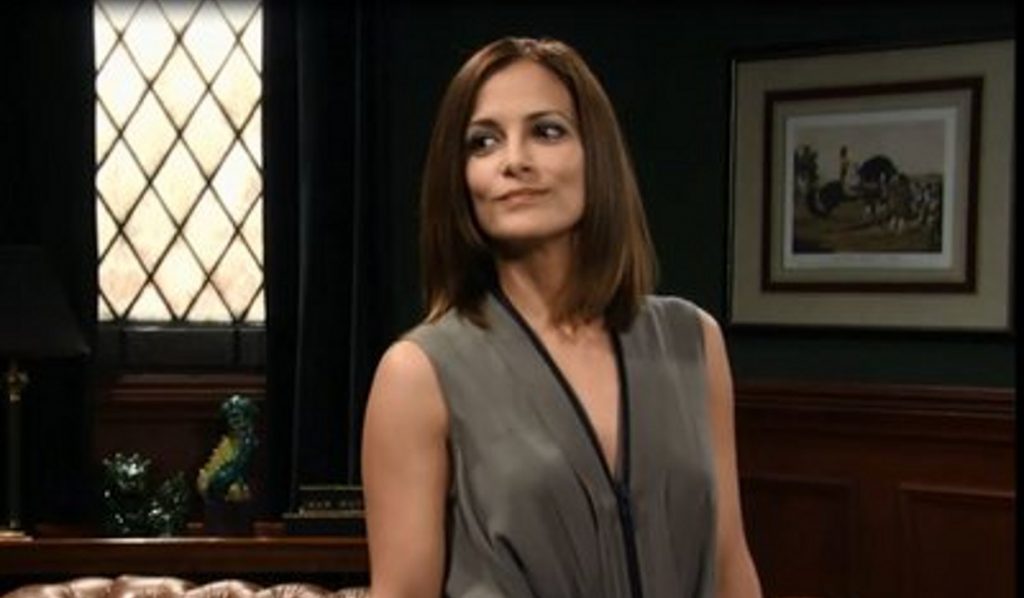 General Hospital (GH) spoilers suggest that now might be the most opportune moment for Hayden Barnes (Rebecca Budig) to come back to Port Charles. If she does, however will she seek to rekindle her romance with Hamilton Finn (Michael Easton)? After all, Finn is the father of her child.

GH Spoilers: It Is The Right Moment For Hayden Barnes To Come Back To Port Charles

GH fans may recall that Hayden left Port Charles in a rush and went into hiding after embezzling money from the hospital. When she fled, she left Finn behind although they were deeply in love and he was her fiancé. To make matters worse, Hayden was pregnant at the time of her departure. She wrote to Finn and claimed that she had miscarried the baby, but this was a lie.

She later wrote to Finn and urged him to come and visit her in Rome, but by this time Finn had already begun a relationship with Anna Devane (Finola Hughes). Some time later, Hayden returned to Port Charles for Elizabeth Webber’s (Rebecca Herbst) and Franco Baldwin’s (Roger Howarth) wedding reception. Around that time, the truth concerning her baby with Finn came out. They had a daughter together and Hayden had named her Violet (Finn’s favorite flower).

When Finn found out, however, he was furious with Hayden for keeping his daughter out of his life. Hayden tried to make things right by introducing Violet to her father and the two quickly formed an amazing bond.

Yet, Hayden couldn’t keep herself out of trouble. Together with Jasper Jacks (Ingo Rademacher) and her former husband, Nikolas Cassadine (Marcus Caloma), she was desperately trying to cause Valentin Cassadine (James Patrick Stuart) to lose his fortune! Fast forward a bit. Nikolas pretended to be concerned for her safety urged her to get out of town. She vanished soon after, but not before leaving Violet with Finn.

Now, however, GH viewers know that events may be ripe for Haden’s return. Not only is Nikolas obsessed with getting his fortune back and ridding himself of his marriage to Ava, but Valentin’s attention is on his grudge against Michael Corinthos (Chad Duell) and on moving to conduct a hostile takeover of ELQ.

Thus, her erstwhile enemies may no longer truly care about exacting revenge upon her. With that said, Hayden and Finn once shared something amazingly special. They even had a child together and Finn has proved to be a deeply loving and devoted father. What happens if Hayden wants Finn back in her life?

This may seem like an easy question to answer. Finn is with Anna after all. However, in recent episodes it’s been revealed that Finn’s relationship with Anna is strained to say the least. He even took Violet and moved out of Anna’s house due to Anna’s obsessive relationship with her newfound “son,” Peter. Circumstances have changed, however, and now Finn believes he was wrong to have doubted Peter. He has even agreed to move back in with Anna.

Even if Hayden initially might want to make a move on Finn, he will likely choose to remain with his current love interest. That may not last long though. When the truth actually comes out about Peter’s deception, Finn may be so angry that he quits his relationship with Anna for good.

Viewers may then see Hayden attempt to create a happy family by taking advantage of her former fiancé’s emotionally vulnerable state. Stick with the ABC soap, and don’t forget to check SOS often for the latest General Hospital spoilers, updates, and news.