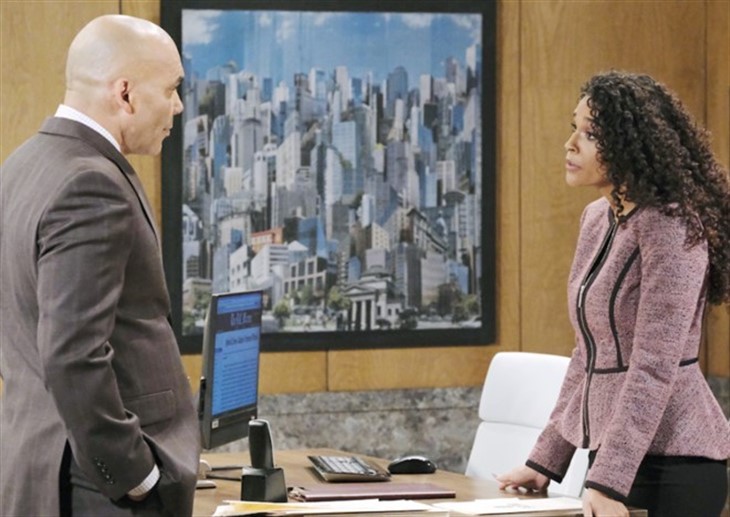 ABC General Hospital spoilers tease that Marcus Taggert (Real Andrews) is quite a catch, and he can’t stay dead forever! When he returns to the land of the living for good, he will need a smart, strong, sexy woman by his side.
There are plenty of those in Port Charles but there are three ladies in particular who he has either had a history with or has been paired with the good effect. Here are three ladies who would be a good match for Marcus.

General Hospital Spoilers – Marcus Taggert Should Be With Portia Robinson

Marcus and Portia Robinson (Brooke Kerr) have history on their side in terms of a relationship. They were together once upon a time and that relationship gave them a daughter, Trina Robinson (Sydney Mikayla). Trina is head over heels for her dad who she thinks walks on water, but does her mom feel the same way?

The reality is that Portia cheated on Marcus with Curtis Ashford (Donnell Turner) and she appears to still have feelings for him. Many fans also think Curtis is her baby daddy!

But, when he does return as a flesh and blood man, there is every possibility that Trina will work to get her parents back together again, and they may find it hard to resist their feelings and/or refuse their little girl.

GH Spoilers – Marcus Taggert Should Be With Jordan Ashford

Should Marcus and his former work partner Jordan Ashford (Briana Nicole Henry) hook up? There are undeniable sparks between them, especially from Marcus who looks at her like a cat looks at tuna.

The one obstacle is that she is married to Curtis and seems to be happy in the relationship. But, when Curtis finds out that she has been keeping the secret that Marcus is alive, Curtis might abandon ship. Curtis has denied having any feelings for his old fling Portia, but if he finds himself crying on her shoulder one thing could lead to another!

General Hospital Spoilers – Marcus Taggert Should Be With Epiphany Johnson

Much has been made of Epiphany Johnson (Sonya Eddy) suddenly being single. But is she ready to mingle? Epiphany has a lot to offer a man: she is brilliant, beautiful and has a great sense of humor. Plus she has the kind of personality to handle a headstrong man like Marcus Taggert. We’ve already seen her interact with him several times, were TPTB chem testing these two undeniable forces of nature?