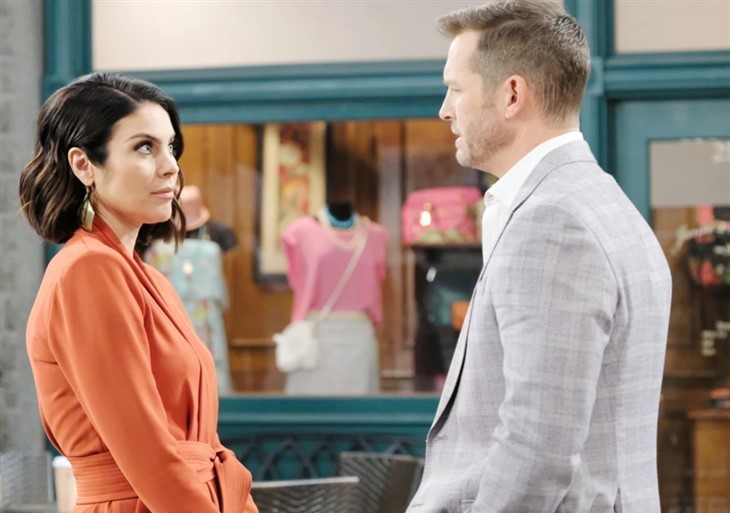 Days of Our Lives spoilers tease that Brady Black (Eric Martsolf) and Chloe Lane (Nadia Bjorlin) will catch up. With his history with Chloe, and Kristen DiMera (Stacy Haiduk) in prison, will he be able to stay true to Kristen?

Longtime Days of Our Lives viewer will recall that Brady and Chloe have a history with one another – they were even married at one time. In fact, there are three former loves of Chloe in Salem right now! She was once involved with Lucas Horton (Bryan Datillo) after he broke up with Sami Brady (Alison Sweeney). That broke up when she cheated on Lucas with Daniel Jonas (Shawn Christian).

As for Brady, they go all the way back to high school, when Chloe was first involved in a teenage romance with Philip Kiriakis (Jay Kenneth Johnson) – only to find out later he only invited her to the high school dance because he lost a bet! However, Philip found himself falling for Chloe in spite of himself! During this same time, she found herself falling in love with Brady, and after she and Philip broke up she became involved with Brady.

Ultimately, she married Brady, and they moved to Vienna so Chloe could pursue her passion of opera singing. That went well for a few years, but then she returned to Salem alone after Brady had gotten addicted to drugs. The last time Chloe was in Salem, she had again broken up with Lucas, then got close with Stefan DiMera (Brandon Barash). Brady was worried about that relationship and tried to win her back, but she left Salem again, to pursue her dreams of opera singing stardom.

DOOL Spoilers – Chloe Lane Again Is Back In Salem

Chloe again is back in Salem, and she and Brady run into each other in front of the Salem Inn. Chloe still cares about Brady – and Brady still cares about Chloe. The first time he had been involved with Kristen, it ended very badly. An off the rails Kristen had raped Eric Brady (Greg Vaughan), getting him kicked out of the priesthood in the process, and Brady found out about it. This happened long before Brady became involved with Kristen, but when he learned of it, he couldn’t handle it.

He broke off with Kristen and began drinking again. He again became close with Chloe during the time Nicole Walker Brady (Arianne Zucker) was believed to be dead. He and Eric had tried to rescue Nicole from a warehouse explosion in Nashville where Dr. Wilhelm Rolf (William Utay) had been performing experiments. They managed to save Holly Jonas (Elin Alexander) but not Nicole. Chloe became Holly’s guardian, although she and Eric fought over the matter. Brady found himself in the middle of the argument a few times.

Brady has a history of going from woman to woman, and Chloe had pointed this out before leaving Salem the last time. He had wanted to reconcile, but she convinced him that his many relationships with no space in between was just another form of addiction. Brady seems committed to Kristen, but with his past, and being a single father, will he gravitate to Chloe again? He may call on her to help take care of Holly, and things could escalate from there!