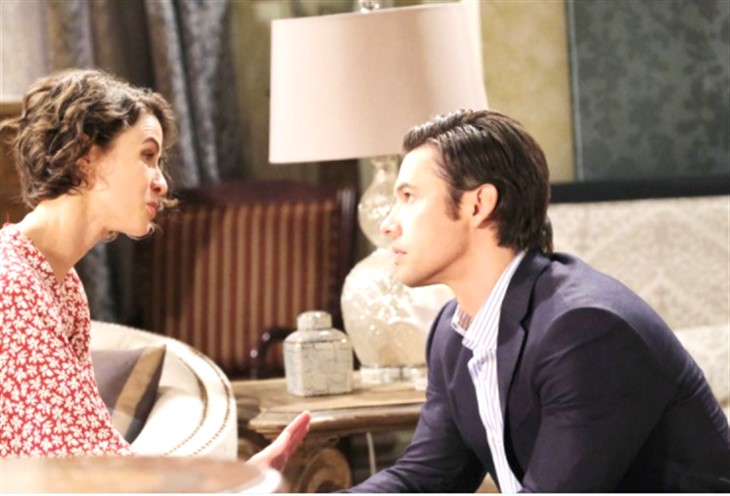 Days of Our Lives spoilers tease that Sarah Horton (Linsey Godfrey) will tell Xander Kiriakis (Paul Telfer) they have to break up! But it’s not what he thinks – there’s a method to her madness!

When Sarah first gives Xander the news that really isn’t bad news, he doesn’t understand! What did he do? Has he made too big of a deal over her being friendly towards Philip Kiriakis (Jay Kenneth Johnson)? They two had been working together to try and find out who Philip’s secret partner was. They had been working together to get proof that Philip was moving money around and cooking the books at Titan Industries.

Sarah tells Xander to calm down – it’s just a pretend breakup! She’s not going anywhere – except to tail Philip on her own and to try to get him to trust her. It’s all part of her plan to get close enough to Philip, so he’ll tell her his secrets – she hopes! Xander isn’t wild about the idea, Philip flirts with Sarah way too much the way it is, and he thinks Philip’s a player. Sarah insists that pretending to flirt back is the only way to get close enough to him to get him to spill! Xander still objects-he is afraid Philip will see through the ploy. Sarah again tells him that is why they have to pretend to break up but make it look real enough to fool Philip!

After much arguing back and forth, Xander finally realizes Sarah’s plot makes sense. But he does make a good point when he asks Sarah about Philip’s “friend”. Xander asks how do they know that Angela Van De Kamp isn’t a lover of Philip’s? Sarah says they really don’t, but if she is, she must be a married woman. Why else all the secrecy, after all? Xander tells Sarah he couldn’t get Kristen DiMera (Stacy Haiduk) to tell him anything about Angela. Sarah tells Xander she couldn’t get Philip to open up to her. She says they have to both make it look real, that they have really broken up.

Days Of Our Lives Spoilers: London Police Accuse Tripp Of Lying, But There’s A Twisthttps://t.co/FcLjIXcJ2M

That means they have to sleep in separate rooms. It also means either he moves his things out of their room or she does, and moves to a different room. There are plenty of rooms to go around, so they decide who goes where. If Philip didn’t live there it wouldn’t make so much difference. But since he does, they have to make this scheme very elaborate. They won’t involve Maggie Kiriakis (Suzanne Rogers). That way no one has to lie to her. Sarah will turn on the waterworks and cry on Philip’s shoulder to start with, and beg him to tell no one – she doesn’t want to upset her mother! Then they will go from there!