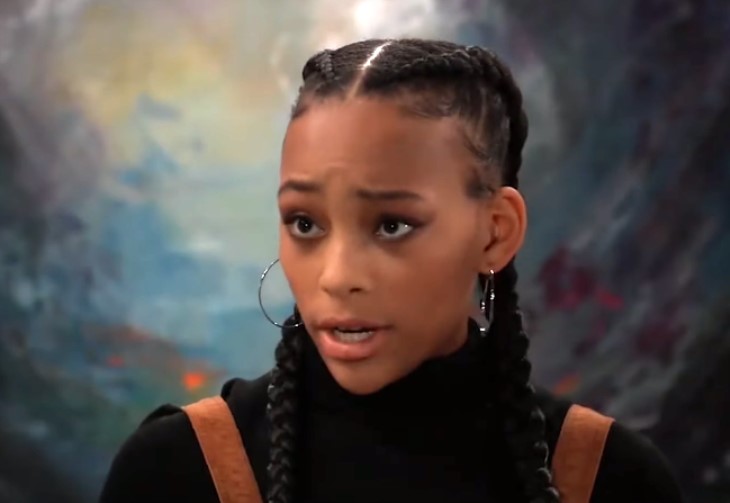 General Hospital spoilers tease that Trina Robinson (Sydney Mikayla) will be livid when she overhears Curtis Ashford (Donnell Turner) talking to her mother, Portia Robinson (Brook Kerr) about the plan to exonerate Cyrus Renault (Jeff Kober) and pin the blame on the deceased members of the DEA takedown team, including her late father, Marcus Taggert (Réal Andrews)!

General Hospital viewers will recall that Police Commissioner Jordan Ashford was conflicted about throwing her former DEA team under the bus, including her former DEA boss, Bob Massicotte, (Randy J. Goodwin), Mark Simon (uncredited character) and Marcus Taggert. Bob Massicotte and Mark Simon were found dead of drug overdoses, uncharacteristic of either one of them since they were DEA, or Drug Enforcement Administration, agents. 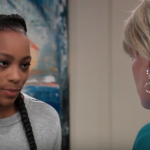 Marcus was able to prove that the deaths had been staged when he almost met the same fate when he was assaulted by two of Renault’s henchmen and grabbed the syringe and put it in his pocket before he could be injected. Sadly, he died anyway after he responded to his daughter, Trina and Cameron Webber’s (William Lipton) kidnapping and was shot – right in front of Trina!

He appeared to have stabilized and was going to make it once he was in a room at General Hospital, awaiting surgery, and was actually going to move back to Port Charles but then a blood clot formed and killed him, according to Dr. Lucas Jones (Ryan Carnes) who was the attending physician. Trina was devastated, after getting her hopes up only to have them dashed forever when she returned from getting her father some malted milk balls, his favorite candy.

Then it only got worse for Jordan – she was in denial at first, until she got a text from her son TJ Ashford (Tajh Bellow) – only it wasn’t TJ that had sent the text. It was one of Renault’s henchmen who had kidnapped TJ and the photo showed him bound and beaten. Shortly after, she was approached by Harmony Miller (Inga Cadranel) who had been blackmailed into working for Renault.

She was to be Jordan’s go-between, and Jordan was then blackmailed into working for Renault as well! Both women received threats to the lives of their children if they did not comply with his orders! Jordan hadn’t wanted to believe that TJ had been kidnapped, even when Molly Lansing-Davis (Haley Pullos) had told her that he hadn’t come home or shown up at work, so not like TJ!

Jordan was so in denial she didn’t even tell her husband, Curtis! And now, it has come to this – and even though she obeyed the order to call her force off the main road that Renault wanted to move drugs through, TJ was not returned to her as promised! What did she expect? TJ could be dead by now and Renault wouldn’t tell the truth!

Things all came to a head in last Wednesday’s episode when Sonny Corinthos (Maurice Benard) and Jason Morgan (Steve Burton) showed up at Jordan and Curtis’ apartment, and Sonny had figured out that TJ was missing because he had been kidnapped! Jordan finally comes clean and admits that she has to exonerate Cyrus Renault, who she and her DEA team had framed before she would get TJ back – if Cyrus is even telling the truth at all.

There really hasn’t been any proof given that TJ is still alive, after all. Jason suggests an idea after Curtis says Jordan can’t be complicit in the frame, which would have to be revealed for Cyrus to be freed. Sonny chimes in that if Cyrus is released, he’ll be a dead man walking with a target on his back because Cyrus has a lot of enemies, and he’s not protected on the outside.

Jordan reluctantly agreed that pinning the frame on her team, who were all now dead, would be the best idea. Sonny tells her all she has to do is contact the appropriate authorities and tell them she had reviewed the case after the remaining team had been targeted and killed and tell them she found that they had planted evidence to frame Renault.

Curtis meets with Portia to get more information about Taggert, and also to advise her of their plan to handle Cyrus Renault and pin the blame on the deceased members of the takedown team, including Taggert. He felt that he should let her know as a courtesy, even though Portia and Taggert had divorced since they share a child, Trina. Portia isn’t surprised and doesn’t doubt that Taggert would have framed someone or planted evidence in a takedown.

Meanwhile, Trina is standing nearby and hears the whole thing! She runs over, livid and in tears and shouts, “How can you say this about my dad!” She isn’t surprised Curtis would come up with something like that since she blames him for her dad having been shot, but her mom??