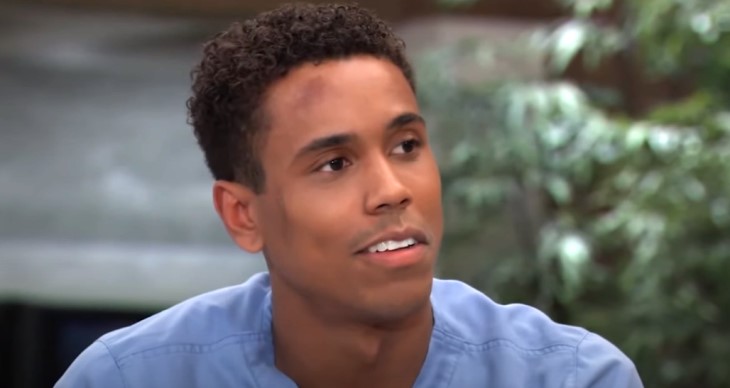 General Hospital (GH) spoilers suggest that TJ (Tajh Bellows) might be in incredible danger if he remembers the criminal mastermind Cyrus Renault (Jeff Kober) had him kidnapped. GH viewers know that originally, TJ couldn’t remember many details of his kidnapping. However, now that TJ is back to work at General Hospital and Mac Scorpio (John J. York) is following up on the notes taken by a police detective, Harrison Chase (Josh Swickard), TJ’s begun to get some of his memory back!

GH fans know that after TJ’s girlfriend, Molly Lansing-Davis (Haley Pullos) tearfully expressed how much she really really didn’t want to get married, TJ left the Metro Court to clear his head. After eight years with Molly, he felt like they should make their commitment to one another public and official. He never guessed that Molly wouldn’t want exactly the same thing. (Why Molly and TJ never discussed marriage in over eight years of being together, no one knows.)

While out moping and in incredible mental distress, TJ was approached from behind. TJ was wrestled to the ground, a bag was put over his head, and eventually, he was chloroformed. (For those that don’t know, TJ was knocked out by chloroform, which is a colorless, volatile, liquid that doctors once used as an anesthetic.)

Now, GH viewers know that Mac Scorpio tracked TJ down at General Hospital. Apparently, TJ has been trying to get his life back to normal by getting back to work. Viewers saw the young medical intern hobbling around on crutches and trying to put a brave face on his recent ordeal. When Scorpio first asked TJ to talk with him further about his kidnapping, TJ pointed out that he had already given his statement to Harrison Chase. Mac felt that there was nothing wrong in going over the kidnapping again because TJ might be able to recall things he didn’t before.

The truth is, TJ isn’t in any more danger than he was before.

Whether TJ remembers that Cyrus Renault had anything to do with his kidnapping or not, viewers know that Cyrus went out of his way to make it so that TJ’s kidnapping couldn’t be traced back to him. Moreover, TJ would probably be dead already if that’s what Cyrus wanted.